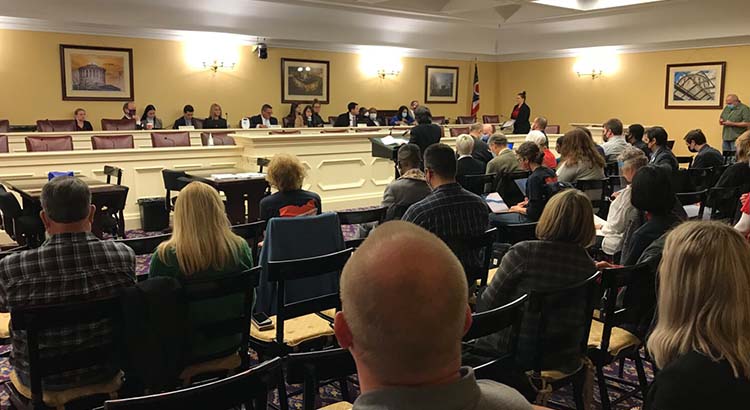 Ending a whirlwind week of testimony before three separate committees, Ohioans pleaded with members of the General Assembly on Friday to consider their wishes in congressional redistricting maps.

Some speakers broke down in tears, as others did in a previous redistricting hearing, saying their time volunteering on elections and in the campaign that changed the constitution to reform the redistricting process shouldn’t be in vain.

“The ultimate feeling of Ohioans is exasperation about what else we have to do to make clear about what we want out of this process and what we want our democracy to look like in Ohio,” said Katy Shanahan, leader of All on the Line Ohio, fighting back her own tears.

When asked by state Sen. Vernon Sykes, D-Akron, if the leader of the anti-gerrymandering group’s Ohio chapter, who trains volunteers and keeps up with all inner-workings of redistricting as part of her job, knew the role of the joint committee, she couldn’t say.

“I don’t actually know what the function of this body is in the form that it’s taken now,” Shanahan said. “I think it’s just to hold the bare minimum two hearings that are contemplated in the constitution and then, at least from the comments that I’ve heard from (House) Speaker (Bob) Cupp and Senate President (Matt) Huffman, this will then retreat back to the chamber-specific committees.”

The constitutional rules regarding congressional redistricting states before the General Assembly can approve of a plan, “a joint committee of the general assembly shall hold at least two public committee hearings concerning a proposed plan.”

“I can’t say that any of these maps are the final maps, I think we’re continuing to work through the process and continuing to make sure we are listening and working to find maps that best achieve the requirements that are in constitution,” Gavarone said.

Still, Gavarone said she has “no doubt we’ll meet the constitutional deadline of November 30th.”

During the committee meeting on Friday, state Rep. Beth Liston, D-Dublin, pushed the chairs on a plan for the maps and the body itself.

“Me and the co-chair will be discussing that after this meeting and we’ll let everyone know as quickly as possible,” said co-chair state Rep. Shane Wilkin, R-Hillsboro.

Gavarone encouraged members of the public to contact her office  and get on an email list to be notified of future meetings.

As the journey toward congressional maps continue, the legislative maps are working their way through the judicial process. The Ohio Supreme Court officially consolidated the three lawsuits challenging the General Assembly district lines approved by the Ohio Redistricting Commission in September.

With the cases combined, the state’s highest court will hear oral arguments on Dec. 8.