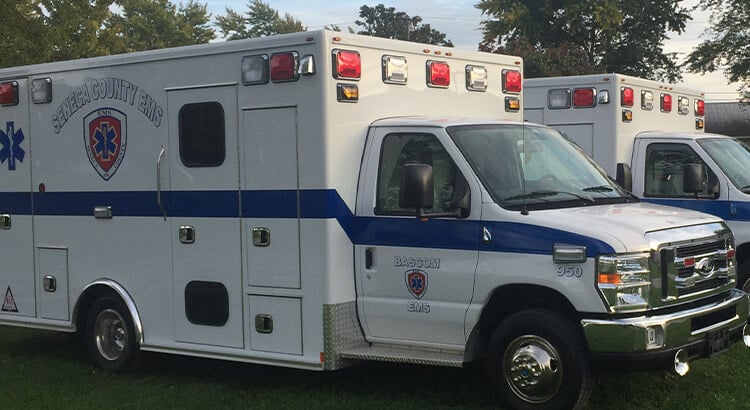 Tiffin, Ohio — The Seneca County Board of Commissioners expressed disappointment this week after learning that the Bascom Joint Ambulance District (BJAD) was the only entity to opt-out of the county’s emergency medical services system.

At this month’s EMS stakeholder meeting, BJAD leadership informed the county that it would be separating from Seneca County EMS to provide its own service independent of the county.

“We have laid out our vision for the future of ambulance service in the county, and it seems that the Bascom Joint Ambulance District has a different vision,” Commissioner Mike Kerschner said. “We’ve done everything we can to bring them aboard with the other districts, but we respect the decision of the Bascom Joint Ambulance District and wish them the best moving forward.”

Due to BJAD choosing to leave the county system, the commissioners signed and sent a letter notifying them that it plans to terminate the EMS agreement in 90 days, per the contract between the two. Since September 2020, joint ambulance district, township and county leaders have met nearly every month to discuss the future of EMS in Seneca County. Over that time, the county has pitched a plan to evolve from a volunteer system that is supplemented by paid personnel, to a full-time paid system that is supplemented by volunteers. This could include two, three or four ambulances that would be in service 24/7.

In October, the commissioners sent a letter to each of the districts asking if they would move forward under the county’s plan, noting that this plan is adaptable and subject to change.

The letter states, “We will require a signed resolution from the Joint Ambulance District boards to establish and formalize this commitment … If by November 6th we have not received anything from your district we will consider this your notice to sever your political subdivision’s relationship with Seneca County EMS. SCEMS will move forward, serving the districts that have decided to be a part of the future of the organization.”

All districts, except Bascom, have approved resolutions in response to this.

“We believe we are stronger and better when we work together,” Shuff said. “We all recognize that there will be challenges and obstacles to face over the next several years when it comes to EMS. We just think we will be better off if we face those issues together, not alone.”

“Providing prehospital care is becoming more challenging and more expensive, but we can build on the foundation of our work in the past 40 years to create something we can all be proud of,” he said. Although the Bascom Joint Ambulance District will operate independently of the county, each of the commissioners said the county would still do its best to assist BJAD when possible. Majors said that the priority would be given to those political subdivisions that decided to be part of Seneca County EMS. “The overall goal is to provide quick, high-quality Advanced Life Support care to those who need it in our service area,” Majors said.

Commissioner Anthony Paradiso said that although it is dispiriting that BJAD leadership does not agree with the county’s vision for the future, he still believes the entities can help each other, with the ultimate goal being to make sure all county citizens have emergency medical care when they need it.

“I feel we’ve turned over every stone to try to make this work (with BJAD). Even if the leadership in Bascom has a different idea of how to provide the service, the important thing is that we are all doing our best for the citizens of Seneca County,” he said.