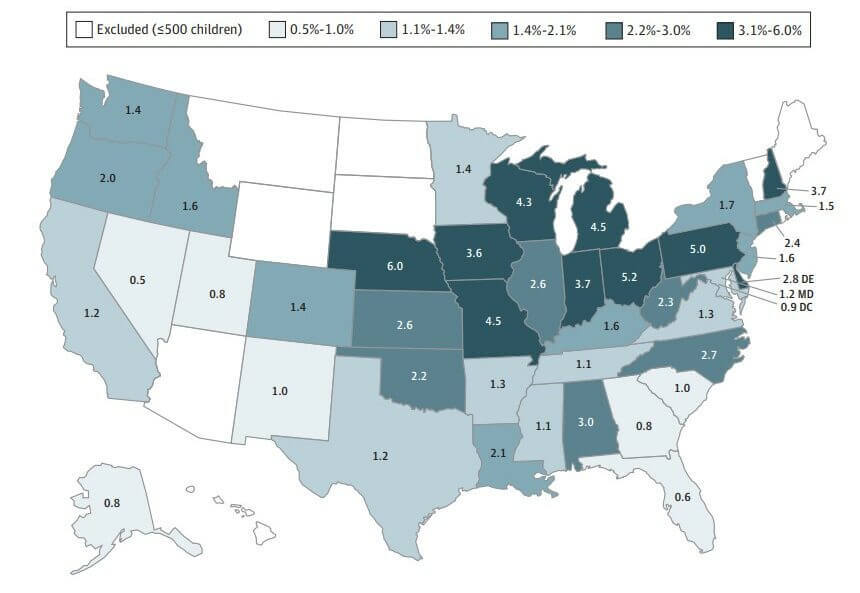 Percentage of children with elevated blood lead levels. Analysis limited to states and the District of Columbia with results for more than 500 children. (Source: JAMA Pediatrics.)
ShareTweet

On Monday, a group of medical researchers published an original investigation in JAMA Pediatrics examining the individual and community-level blood lead levels in children across the United States.

As reported in the Ohio Capital Journal, this study found Ohio’s rate of blood lead elevation in children well over double the national average and higher than every other state with data aside from Nebraska.

In a world in which everything seems to be a political issue, reducing lead poisoning in children seems like an obvious problem to rally resources around whatever your political affiliation may be. And the economics of the problem justify intervention well.

Altarum, a Michigan-based nonprofit health and health care research and consulting firm, estimates the lifetime economic burden of lead exposure in Ohio at $2.8 billion. These costs are borne in the form of reduced lifetime productivity, increased spending on health care, education, and social assistance, and premature mortality.

Luckily, governments have options to reduce lead hazards for children. One option is controlling current lead hazards through strategies such as treating paint, dust, and soil with lead contamination and replacing old windows. According to Altarum, a half-billion dollar lead hazard control program would help about 50,000 households and 64,000 children and would yield $660 million in gross benefits, a return of $1.40 in benefits for every $1 spent on lead abatement.

Outside of paint, childhood lead exposure also comes from lead pipes. Governments can therefore also reduce lead exposure by replacing homeowner and utility lead service lines for those without lead. According to Altarum, a $170 million lead service line replacement program in Ohio would replace 25,000 lines, help protect 32,000 children, result in $230 million in gross economic benefits, and result in a return of $1.40 in benefits for every $1 spent on replacing lead pipes.

Additionally, the Environmental Protection Agency has issued standards for renovation, repair, and painting, requiring lead-safe work practices. Since enforcement for Environmental Protection Agency standards often falls to state government, this can be another cost-effective tool for reducing lead exposure for children. Altarum reports that a $74 million enforcement program could impact 200,000 renovations, protect 11,000 children, and yield $220 million in gross benefits, a return of $3 in benefits for every $1 invested in the program.

These numbers make the efficiency case for investment in lead abatement: Lead poisoning leads to lower productivity, more spending on health care, education, and social assistance, and premature mortality. Interventions that can reduce lead poisoning and these impacts at low cost can thus grow the economy. But lead poisoning reduction can also improve equity outcomes in the state. For instance, the counties with the highest rates of elevated blood lead levels in the state, Cuyahoga, Hamilton, Lucas, and Mahoning, all have rates of elevated blood lead of over 12%, more than twice the state average and six times the national average. They are also many of the counties with both the highest poverty rates and the largest Black populations.

Lead treatment, pipe replacement, and enforcement of Environmental Protection Agency building standards are all cost-effective tools for reducing lead exposure that also can improve equity outcomes. If Ohio wants to do something about lead exposure among children, it has the tools to do so.