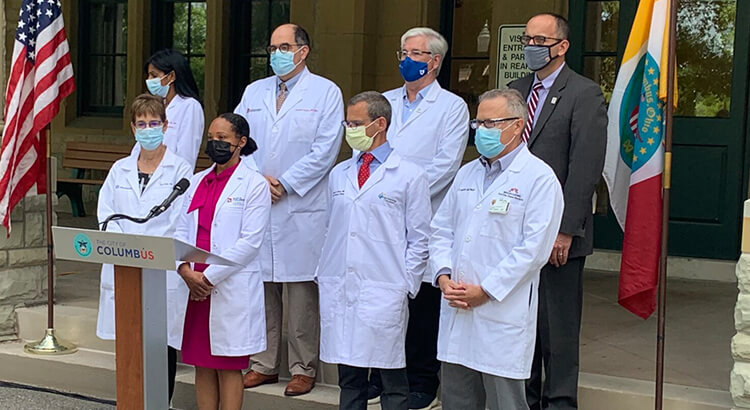 Eighteen months into the COVID-19 pandemic, state and local public health departments that were already struggling with too few workers and too little money have been pushed to the brink — and for some, beyond the brink.

“My staff is burnt out, overworked and underpaid,” Dr. Mysheika Roberts, health commissioner with the Columbus Public Health Department in Ohio, told U.S. House members on Wednesday. “Some are leaving the field entirely, unable to contribute any more to the work they once loved.”

She and other public health officials from Kansas and Louisiana painted a bleak picture to the House Select Subcommittee on the Coronavirus Crisis during a hearing on the challenges facing public health departments.

While some of those problems have intensified during the pandemic, such as harassment and vitriol from those who refuse to believe the science behind vaccines, other issues, like a lack of resources, have been mounting for decades.

Roberts described how an emergency-preparedness unit that once had 20 staffers was down to five by the time the pandemic hit. Staffers from across the public health agency, some whose jobs have little to do with infectious disease response, have been called into the all-hands-on-deck fight.

The result? Staff fatigue and early retirement, while those who remain on the job have faced harassment and challenges to the authority of public health agencies.

Officials from across the country told similar stories.

Dr. Jennifer Bacani McKenney, a health officer in the Wilson County Health Department in Kansas, said a local sheriff volunteered to escort her to her car after a public meeting on mask mandates, because he was worried about the angry residents who spoke at the meeting.

McKenney, who is still employed by the rural health department, said she was later told that her job would be opened up for applications because she focused “too much on health and science, and not enough on business.”

“Many of my colleagues have experienced worse harassment than me, by the general public and elected officials, but some have not been able to speak up for fear of retaliation,” McKenney told the committee.

Since the pandemic began, more than 300 state and local public health leaders have left their jobs, according to Dr. Beth Resnick, assistant dean at Johns Hopkins University’s Bloomberg School of Public Health. That represents 1 in 5 Americans losing a public health official in their community.

McKinney attributed the decisions of many of those workers to the strain caused by the hostilities that her colleagues and others across the country have endured since the pandemic began.

“It’s because every day, they have to endure things like people lying to them about their close contacts or when their symptoms started,” she said. “It’s truly the personal effect of the way they’re putting their whole heart into everything that they’re doing to help people, only to get other people to, again, lie or yell or attack or shaming them in public for just trying to do their job.”

Resnick said she and her colleagues have identified at least 1,500 incidents in which public health workers have been attacked or harassed since the pandemic began. Half of local health departments they surveyed reported at least one incident of an attack or harassment, from protests to death threats to shots fired at their homes.

She urged members of Congress to establish a national reporting system for incidents of violence and harassment against public health workers, and for the federal Department of Justice to support state and local prosecutors in enforcing existing laws.

They expressed frustration with grants that may last only a year or two, and that are narrowly tailored to specific diseases or health challenges at that moment.

That system of funding makes it too difficult to retain talent within agencies that should be well-prepared to respond to a broad range of threats, they said.

“You can never build for the future if your funding is limited to the priorities of yesterday’s appropriations,” said Dr. Joseph Kanter, state health officer and medical director for Louisiana’s Department of Health.

Illustrating the scale of what health agencies are still grappling to contain, Kanter noted that Hurricane Ida resulted in 30 deaths in Louisiana. Since that storm made landfall, his state has tallied 1,541 deaths related to COVID-19.