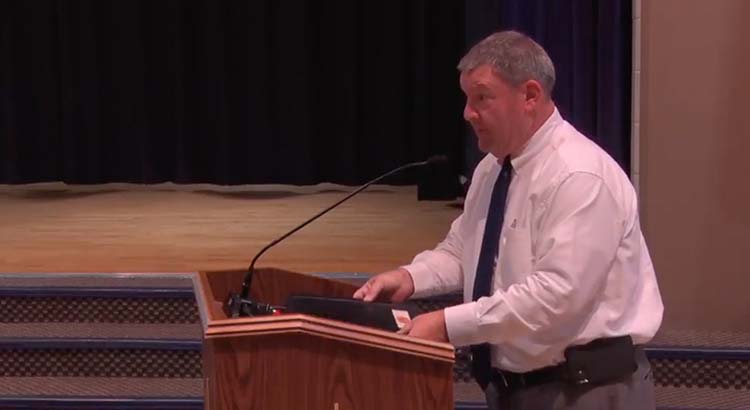 Former Tiffin City Board of Education member and current candidate for the board, Dean Henry, addresses board members during a meeting Oct. 19, 2021. (Screenshot via Tiffin City Schools / Facebook)
ShareTweet

Tiffin, Ohio — During a Tiffin City Board of Education meeting last week, school board candidate Dean Henry criticized a board member for attempting to start a debate over critical race theory, labeling it a “non-issue” and a “red herring” — adding that the district has far more pressing issues to worry about.

Critical race theory is an academic concept and practice that recognizes systemic racism is deeply ingrained in American society and examines how our systems promote inequality.

Academics, particularly legal scholars, have studied critical race theory for decades, according to NPR. But its main entry into the partisan fray came in 2020, when former President Donald Trump signed an executive order banning federal contractors from conducting certain racial sensitivity trainings. It was challenged in court, and President Biden rescinded the order the day he took office.

Since then, right-wing politicians and media figures have been using critical race theory to start another “culture war” ahead of the 2022 midterm elections. This is despite the fact that teachers nationwide say K-12 schools are not requiring or pushing them to teach it, according to a survey obtained by NBC News.

During the Tiffin school board meeting on Oct. 19, Henry said a current board member is attempting to begin a local debate on the subject.

“I hope that there’s not going to be any attempt by this board, or any members of this board, to create an issue that simply does not exist,” Henry said.

“I spent four years on this board. Critical race theory has been around for about 25. It was never mentioned once in the four years I was on this board,” Henry said. “In the two years that I was off this board, the only person that has mentioned it in the context of this school system is one of our board members.”

Henry said the debate over critical race theory, or CRT for short, in K-12 education is not only a “non-issue from a curriculum standpoint,” but also a “red herring.”

“We have bigger problems to solve, bigger fish to fry, than engaging in a debate over a subject that really isn’t a subject for us to consider at all,” Henry said.

“The question came up at a candidate forum, and my response was, when you show me a curriculum, I will tell you as a board member whether I agree or disagree. And that is, in fact, the job of a school board. Along with a few other things, we set curriculum to the extent that it’s not set by the state.”

Henry encouraged all board members and candidates to “play fair with the public.”

“Let’s not dangle an issue that really isn’t an issue, and let’s concentrate on the important things that we have to address immediately and in the near future. Like finances, like a long-range plan, like renovation or construction of buildings, like cutting our expenses, and like getting the public back to recognizing that we’re going to do a good job here, and we’re going to do it in an honest and transparent way, and we’re going to keep our dialogue to real issues that affect students,” he said.

Among those issues facing Tiffin City Schools, Henry said, is the short-term budget outlook for the district.

“I was impressed, in a negative way, with the fact that there’s certain board members here that don’t seem to be concerned about the fact that we’re looking at a $1.8 million expenditure over revenue line item in the next year and a half,” Henry said. “That’s a lot of money, even in a 33-to-35 million dollar budget.”

Henry said at a time when the district’s recent operating levy and bond issue were rejected by voters, the board is “leaving the public, perhaps, with the impression that [they] think a deficit spending situation is no big deal.”

“Well it is a big deal, because it doesn’t go away by itself,” Henry said. “There’s only two ways to get rid of deficit spending. One of them is to raise additional revenue, which by the way, we have not been successful doing in the last couple of years. And my guess is it’s going to be tough to do that in the next few. And the other way is to cut expenses, that’s pretty much it.”

Henry said as a taxpayer, former board member, and potentially future board member, he views deficit spending as an example of a “real issue” facing the district.

“We’re not going to get additional monies from the public if they don’t see that we’re spending the monies we have wisely,” Henry said. “And talking about deficit spending as if it is A, not a problem, or B, is going to go away on its own, is, I believe, problematic.”