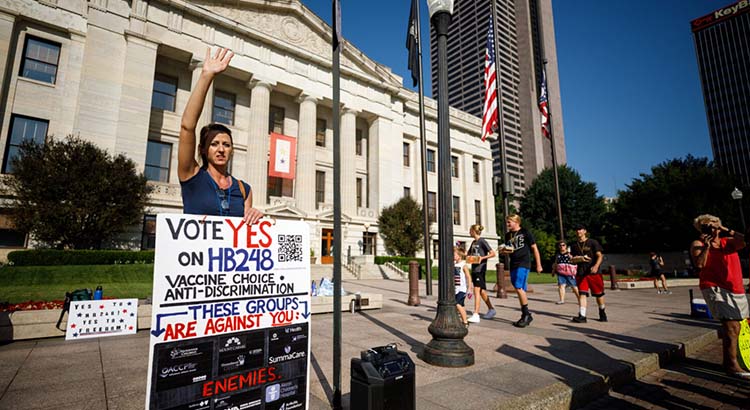 It’s déjà vu all over again, but with longer hearings this time.

An Ohio House committee is meeting twice this week to take a scheduled 14 hours of testimony on legislation to ban vaccine mandates — the eighth and ninth such legislative hearings, now occurring under a second House committee.

An initial, expansive version of the legislation has stalled. It would cover all vaccines, not just COVID-19; it likely bans governments from offering incentive programs; it says people, insurers, schools and businesses cannot mandate or “otherwise request an individual to receive” a vaccine; and it didn’t make any exceptions to allow mandates in medically sensitive places like hospitals and nursing homes.

In addition to vaccines, the leadership bill also provides civil immunity from lawsuits for people and businesses who negligently spread COVID-19, even if they flout a government order like a mask mandate when doing so. The immunity would not apply if they spread COVID-19 intentionally or recklessly.

The House Health Committee passed the bill last week on party lines, just a few hours after it was introduced. However, leadership pulled the bill from a floor vote the next day, signaling discord within the supermajority House GOP.

On Sunday, House Speaker Bob Cupp, R-Lima, wrote a letter to members, laying out plans to host the two hearings with the House Commerce and Labor Committee this week “to further the goal of additional process.” Lawmakers can propose amendments until Thursday evening.

“Our entire House leadership team looks forward to working together on this important issue,” Cupp said.

The legislation revolves around vaccines that are safe and effective preventatives against COVID-19, which has now killed 705,000 Americans, more than any war or pandemic in U.S. history. Nearly 22,500 Ohioans have died of COVID-19, approaching the estimated 23,000 Ohioans who died during World War II.

Wednesday’s hearing was emblematic of how the debate has unfurled since the first vaccine mandate bill’s hearings began in May.

On the one hand, a broad base of health care providers, insurers, nursing homes, hospitals, public health officials and business groups, calling themselves the Ohio Vaccine Coalition, said unequivocally that the legislation is a bad idea.

“House Bill 435 fall short of what our state needs as we work toward pandemic recovery, and this bill does not address the concerns expressed by the medical, business and university communities about prior proposals of a similar nature,” the coalition said in a statement. “Protection of an employer’s rights to make decisions in the best interest of their employees and those we serve cannot be over-stated.”

On the other hand, an anti-vaccine activist said vaccination should be a matter of personal choice. Bankruptcy attorney Mitchell Marczewski, representing the Ohio Medical Freedom Coalition, expressed doubt that vaccines work and said vaccine mandates are a civil rights infringement on par with slavery in the 1800s or racial segregation and voter disenfranchisement in the 1900s.

Rep. Juanita Brent, D-Cleveland, who is Black, said to Marczewski, who is white, that the comparison is “insulting” and baseless.

“This is not people’s civil rights in comparison to slavery,” she said. “This is not even in the same ballpark.”

The bill’s circular trajectory reflects efforts to draft legislation broad enough to appease its most zealous supportive and narrow enough to get enough votes for passage — a heavy lift given opposition from Statehouse power centers like the Ohio Chamber of Commerce and Ohio Hospital Association.

“We have counseled members that the more expansive of a bill you make this out to be, you diminish its chances of passage,” he said.

While the committee was scheduled to meet for seven hours Wednesday, it ran out of witnesses after about two-and-a-half hours.

In a statement after the hearing, Rep. Michele Lepore-Hagan, D-Youngstown, lambasted Republicans’ “constant pandering to conspiracy theorists” seeking to undermine trust in the COVID-19 vaccine.

“Our constituents are rightfully worried about their children getting sick and staying in school, having a safe workplace, and just being able to get back to normal,” she said. “They want an end to this pandemic.  We are never going to get there so long as the Republican leadership in the Ohio House is giving a microphone to these fringe views.”