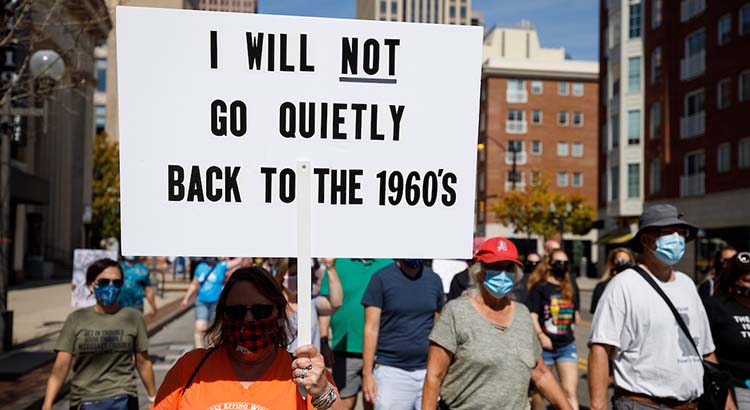 COLUMBUS, Ohio — Protesters march south on High Street, part of a large circuit downtown that changed from the planned route due to the large turnout. More than a thousand people gathered at the Statehouse as part of the nationwide Women’s March focussing on reproductive rights, Saturday, October 2, 2021. Photo by Graham Stokes for OCJ.
ShareTweet

State government has taken a hard right turn down a dangerous road in Ohio. It’s not where most Ohioans want to go, but that doesn’t matter. The legislature doesn’t answer to us. An extreme minority is calling the shots with GOP lawmakers. Same thing is happening in other states where Republicans, with an absolute lock on power, have sold their souls to keep it.

The legislative playbook of Ohio Republicans in the General Assembly follows the priorities of extremists and embedded lobbyists, not a majority of Ohio voters. For example, there is no massive clamoring in Ohio for permit-less concealed carry in the state. No broad consensus against mandating safe, effective vaccines in the fifth least safe state in the nation during the pandemic.

No universal support in Ohio for universal vouchers to pay tuition at religious and private schools with tax money that should be spent on the public school education of more than 1.8 million students. No vast outcry across the state to ban an obscure academic discipline (critical race theory) from being taught in public K-12 schools — because it isn’t.

No pervasive demand from a distinctly diverse Ohio population to whitewash longstanding racial disparities as “divisive concepts.” No. This nonsense is coming from a narrow, but vocal and well-funded right-wing constituency. Republican legislators willingly peddle extremism not embraced by the mainstream to score points with their base. Not serve their district. And no one holds them accountable.

The speed of Ohio’s surrender to emotion-based radical governance should alarm every rational center-right or center-left Buckeye and drive a hair-on-fire push for urgent course correction at the polls. It doesn’t. That must change among both dismayed Republicans and Democrats. We have ignored state politics at our peril for too long.

It’s easy to do. Too many things going on with work, family, life to worry about what is happening in Columbus. We’re still recovering from the 2020 hellscape and Trump insurrectionists storming the U.S Capitol to overturn an election. We’re burnt out on bad news. I get it. But ignoring unscrupulous politicians on an alt-right roll just gives them impunity to advance more public policy in the extreme.

We no longer have the luxury of tuning out the machinations of our state government. Not if we give a damn about a democratic republic surviving in Ohio. The window of opportunity to bring the state back from the autocratic brink is closing. Under one-party rule, the state is rapidly careening to a markedly anti-democratic place where radicalized players shape policymaking to dismantle rights we take for granted and institutions we value from a constitutionally decreed system of common schools for all Ohio students to free, fair and accessible elections for all voters.

We must confront the rising danger of being ruled instead of represented. Sometimes, history beckons us to leave our comfort zone for something greater than ourselves. We’re there. Our democracy is eroding in real time in Ohio with illiberal bills being introduced almost daily to placate minority extremists or special interests with sway to cement political power.

As added insurance, state Republicans aim to curb voter turnout. Too many Ohioans voting might threaten their absolute control over the state. To that end, House Republicans have introduced two bills, one more extreme than the other, to impose even more restrictions on voting in hopes of discouraging participation. They’re following the same voter suppression template used in other Republican states to erect arbitrary hurdles that target voters who lean left. It’s a ploy not to enhance election “integrity,” (in a state with a longstanding record of safe, secure and impartial elections) but to manipulate the voting process for partisan ends.

The Flipping Five could do it again when the commission votes on the new congressional district map at the end of the month. They could endorse another gerrymandered version of the convoluted congressional district lines that previously handed Republicans 75% of the seats in a state where GOP candidates earn just over 50% of the statewide vote. Unconstitutional or not, the Republican fix could be in at least for the midterms and presidential election.

Blood boiling yet? Hold Gov. DeWine, Secretary of State LaRose and State Auditor Faber accountable. All are running for reelection next year. So is your state representative and maybe your state senator. Find out who represents you in the Ohio House and Ohio Senate by clicking on ohiohouse.gov and ohiosenate.gov (tap “Learn about the Senate.”)  Then, do some digging about how your representative or senator voted and what they sponsored. A good resource — justfacts.votesmart.org — will give you insight into both.

Don’t wait for yard signs to appear with names you don’t know and brush off down ballot legislative races as usual. That’s how Ohio got in this mess. Wake up. Self-government is slipping away. Save it.