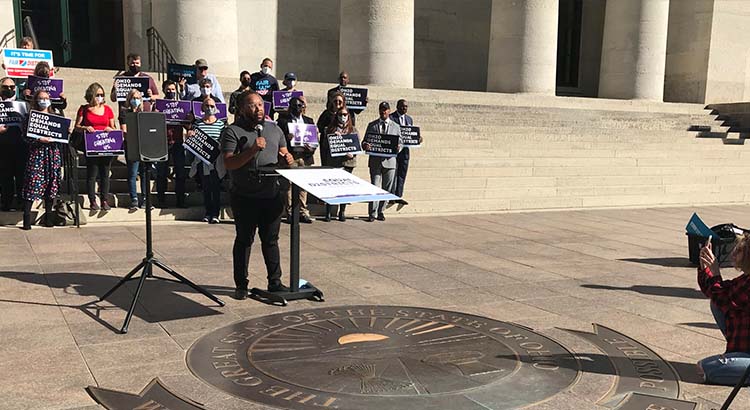 Prentiss Haney, co-executive director of the Ohio Organizing Collaborative, speaks at a rally for the Equal Districts Coalition. The coalition stood on the steps of the state capitol to urge public hearings on congressional redistricting. Photo by Susan Tebben, OCJ.
ShareTweet

The Equal Districts Coalition held a rally on the Ohio Statehouse steps on Wednesday, calling for public hearings on congressional redistricting maps that they said should have already been held by the official Ohio Redistricting Commission.

“The lack of leadership to follow through with the will of the people is troubling to say the least,” said Chris Tavenor, a staff attorney for the Ohio Environmental Council, one of the members of the coalition.

The coalition asked for public hearings from the official commission, which have yet to be scheduled, but they plan to have their own virtual public hearings on Thursday and Oct. 25 and 26.

The official redistricting commission has until the end of the month to approve a map. If they fail to do so, the process heads back to the legislature.