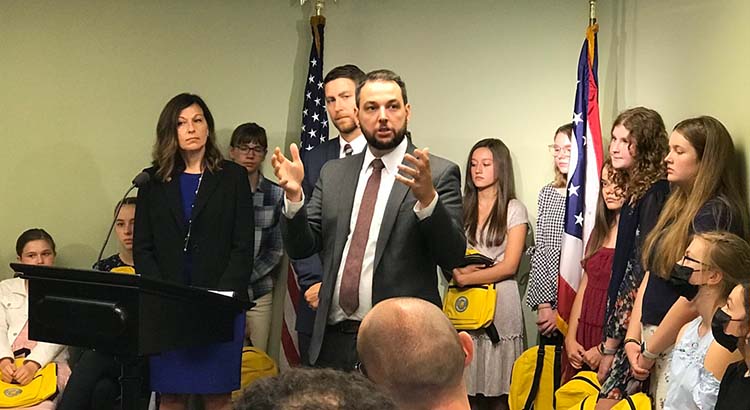 Aaron Baer, president of the Center for Christian Virtue, talks about a “backpack” bill to change a private school voucher program in Ohio. Behind Baer are state Rep. Marilyn John, left, and state Rep. Riordan McClain, center, who are co-sponsoring the bill. Photo by Susan Tebben
ShareTweet

The sponsors of a bill that would promote the use of private school vouchers and “school choice” came together on Wednesday with a religious lobby group to bring the bill back up.

House Bill 290 was originally introduced in May as a “legislative intent” bill aiming to allow students to have the funding they need “follow them” to private schools of their choice, should parents decide the public school system is not working for them.

The bill came before passage of the new budget bill, which included the Fair School Funding plan, an overhaul of the public school funding model.

In the new language being added to the bill, if a family applies to be a part of the private school voucher program, sponsors say the taxpayer money the state would use to fund EdChoice or Cleveland scholarships would be put in individual educational savings accounts for the students use.

The bill’s other cosponsor, state Rep. Marilyn John, R-Richland County, said the bill isn’t meant to discredit public education, but to allow student who learn differently to be able to have different options.

McClain said they don’t have an estimate of how many students would be impacted by the so-called backpack bill, though they don’t expect to see a mass exodus of students headed to private schools, more of a gradual upward trend.

“It’s something that, once we set the agenda for where we want the future of the state to be, the hope is that that network gets built up and those opportunities are created,” McClain said.

Included in the press conference was religious advocacy and lobbying group Center for Christian Virtue, which backs the bill because of its focus on school choice and to make public school districts perhaps think twice about instituting what they see as controversial policies.

Aaron Baer, president of the Center for Christian Virtue, said amidst debate in the General Assembly on critical race theory — which CCV has called “a racist ideological grandchild of Marxism that’s being taught in schools across the state” in a fundraising email in support of anti-CRT legislation — parents should be able to take the lead in their student’s education.

Baer also brought up the Upper Arlington school district, which tried to implement some bathrooms at their schools that were gender neutral, before the city of Columbus said that was against city code. The school district had said students who used the gender-neutral bathrooms had been doing so without incident.

“A bill like this would be able to say: Look, Upper Arlington, if this is what you want to do, if this is the policy you want to have, okay,” Baer said. “But now…those families are allowed to go elsewhere and maybe you’re going to think twice about doing something that parents don’t like.”

The bill was already spurned by education associations and public school advocates when it was introduced, but the new language has done nothing to change minds.

“Ohio parents and students overwhelmingly want quality local public schools,” said Melissa Cropper, president of the Ohio Federation of Teachers. “They don’t want the radical defunding of public schools that this bill would likely cause.”

The backpack bill current sits in the House Finance Committee, but has not been scheduled for a hearing.