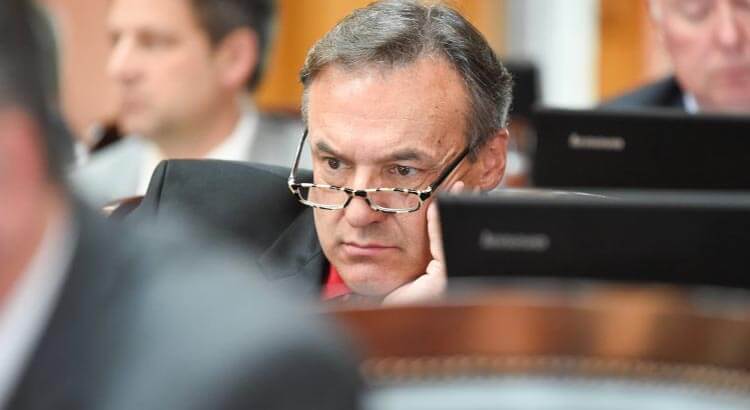 A cohort of roughly 15 anti-vaccine activists gathered around an apartment in Gahanna where they believed Ohio House Health Chairman Scott Lipps, R-Franklin, resides — one of three similarly sized protests at residences Friday where they figured he might be.

They gathered to protest the Health Committee’s failure to pass sweeping legislation to ban vaccine mandates from employers to employees and businesses to customers. The bill spanned all vaccines (not just COVID-19); it made no exceptions for hospitals and nursing homes; and it also would ban incentive programs for vaccination from the state, health insurers or others.

Instead, the Health Committee passed the narrower House Bill 435, which bans COVID-19 vaccine mandates from employers unto new hires only, and forces colleges to accept “conscience” exemptions to their mandates for students. This broad exemption effectively neuters colleges’ ability to mandate vaccination. The bill, if passed, allows mandates in hospitals and would expire in June 2023.

The bill passed the committee despite heated criticism from the business and health care sectors, but was pulled from a floor vote last week, indicating discord among House Republicans on the issue.

Subsequently, activists with “Moms Against DeWine” posted two addresses for planned protests, one of which is registered to a family member of Lipps. In a Facebook livestream of the event, a man can be seen with a pistol holstered to his leg. Another person in the crowd is seen in clothing with insignia associated with the Proud Boys, a far-right political organization with a reputation for street violence that has been accused of conspiring to execute the Jan. 6 raid on the U.S. Capitol.

One man in the crowd, Damon Appel, who Lipps ejected from a hearing on an anti-vaccine bill in August after he testified in support of it, has posted on Facebook footage of him outside the Capitol on Jan. 6. In a previous interview, Appel acknowledged his presence outside but said he never entered the Capitol that day.

The protest underscores the extreme nature of COVID-19 politics. A short 18 months ago, Lipps addressed a meeting of anti-vaccine advocacy group Health Freedom Ohio. He requested their help to “stop this vaccine s**t that’s coming.”

In a text message, he said he didn’t interact with the protesters in any of the three locations.

“Obviously, this is our personal space and refuge from Columbus,” he said. “I do view this as an invasion of privacy and don’t understand how people think this helps their issue. We were told there were about 12 to 16 protesters at each location. This behavior does not serve to build a relationship with me or open a dialogue.”

Republican U.S. Senate Candidate Mark Pukita, who has hosted campaign events teaching Ohioans how to obtain exemptions to vaccine mandates, said one of his staffers attended the protest outside Lipps’ home. When asked whether protesting outside the personal residences of officeholders is appropriate, he said that’s irrelevant.

“It doesn’t matter if it’s appropriate or not; it’s legal,” he said.