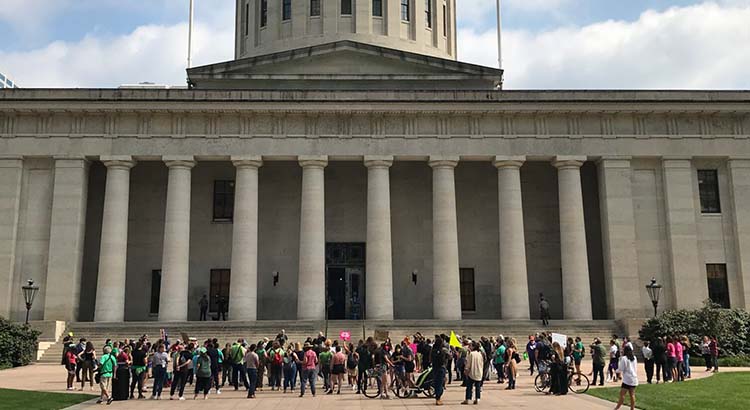 Protesters of a bill to promote a total abortion ban with the overturning of Roe v. Wade demonstrate outside the Ohio Statehouse on Tuesday. Photo by Susan Tebben
ShareTweet

Over the last year, state data shows that abortions have risen in Ohio despite several efforts to deepen regulations on the practice.

The 2020 “induced abortions” report from the Ohio Department of Health shows terminated pregnancies increased by 3% from 2019 to 2020. Since 2000, however, there has been a steady decline in abortions, about 720 less on average per year.

The abortion report supported arguments abortion rights advocates made during a protest last week of a proposed abortion “trigger ban.” At the rally, speakers said limiting reproductive rights predominantly affects minority groups and members of the LGBTQ+ community, who may not have access to other health care options.

“If you’re queer, if you have a uterus, if you are Black, if you’re indigenous, if you’re AAPI, if you’re Latinx, we’re the ones who don’t have a choice about what happens to us and our bodies,” Jasmine Henderson, director of policy and social impact for the Ohio Women’s Alliance, said during the Sept. 30 protest.

From 2019 to 2020, nearly half (48%) of those who obtained abortions in the state were African American, according to the state report.

White residents represented 44% of the population that received abortions in the state, with 5% of abortion patients reporting more than one race and 3% were Asian/Pacific Islander.

The report also stated that 62% of all induced abortions were in pregnancies less than nine weeks along, followed by 25% in gestation periods of nine to 12 weeks. Gestational age was found using ultrasound in 93% of cases.

Abortion is legal in the state up to 22 weeks gestation.

Abortions in the state were mainly in counties with major cities, with 31.5% happening in Cuyahoga County, 18.4% in Hamilton County, and 17% in Franklin County.

One of the bills currently in the Statehouse attempting to regulate abortion is Senate Bill 157, which would require physicians to conduct life-saving measures in the case of a “botched abortion” or “failed abortion,” and sponsors say it would also “provide a reporting system” for those cases in Ohio.

The induced abortion report from the state already reports “failed abortions” as a part of “post-abortion care report” data. Failed abortions make up the biggest portion of complications, but only occurred 46 times in 2020.

Of the 441 abortions conducted past 19 weeks gestation, none were considered viable pregnancies based on ultrasounds in all cases, and other testing in some cases.

Pro-choice advocacy group NARAL Pro-Choice Ohio said the report was a snapshot of the significance reproductive rights have in the state, despite legislative efforts to curb it.

“More Ohioans got abortions in 2020, which demonstrates how important abortion access is in our state,” said Kellie Copeland, NARAL executive director, in a statement. “Everyone deserves to have to that care in their community without judgment, delay, or stigma.”

“We are 100% committed to seeing an end to abortion in our state,” said Ohio Right to Life President Mike Gonidakis in a statement. “We will see to it that the day comes when Ohio’s abortion report simply reads ‘zero.’”