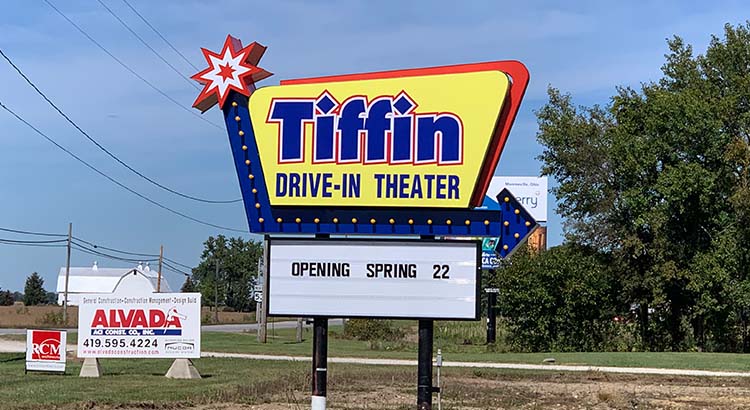 Tiffin, Ohio — The Tiffin Drive-in Theater, which has been in operation since 1949 and is now under new ownership, unveiled its new roadside sign this month as it prepares to reopen in spring 2022.

Michael Cole, the new owner of the drive-in theater, is working with the design team of RCM Architects and the building firm of Alvada Construction on renovating the property.

“If you take a drive out on State Route 53, you’re going to see something new at our theater these days. We just installed our new drive-in theater sign,” Cole said in a video showcasing the new sign.

“Right now we’re in the early stages of the electrical and plumbing phase of our construction project here, so we’re really still many, many weeks out from being completed with the construction,” Cole said. “We’re working as hard as we can, and as fast as we can, but most importantly we’re just trying to do everything right so that when we do open in the spring, we’re going to bring you the best entertainment experience here at the Tiffin Drive-in Theater that we can.”

The old structure underwent demolition in January of this year, making way for the totally new building. In addition to an upgraded concession food operation, and new restroom facilities, the new building will bring state-of-the-art large screen projection capability to the drive-in as well.

The new concession stand building will house everything the theater needs to conduct a drive-in theater business for many years to come — the concession food operation, new restroom facilities, offices, and even a gift shop. The most noticeable structural departure from the old building will be the addition of a partial second story — the location for two elevated projection booths for the theater’s two screens. These booths will house two all-new state-of-the-art laser cinema movie projectors, which will project the brightest, sharpest image available today in the movie industry.