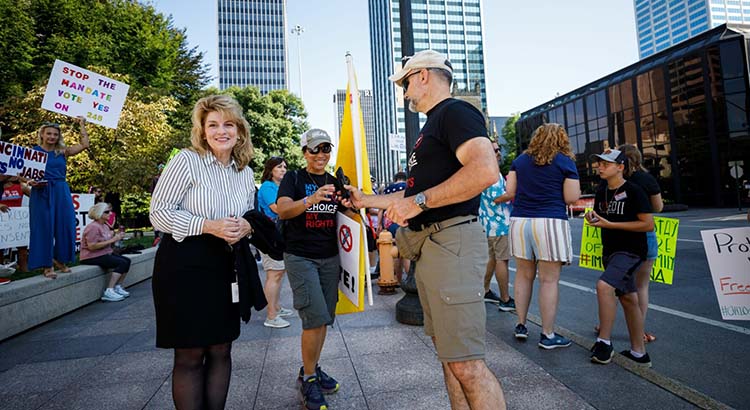 COLUMBUS, Ohio — Groups opposed to mandated vaccinations protest on the grounds of the Ohio Statehouse, inside the House Health Committee meets to discuss HB 248 which would prohibit mandatory vaccinations and vaccination status disclosures, Tuesday, August 24, 2021. Bill sponsor Rep. Jennifer Gross met with the protestors outside the Statehouse. Photo by Graham Stokes/Freelance Photographer.
ShareTweet

Don’t kid yourself. Texas radicalism isn’t just coming to a state near you. It’s been in Ohio for a long while and getting worse. Understand that the abhorrent politics being practiced against Texans by the GOP is being mimicked by Republican copycats in Columbus. Hold that thought. Jaws dropped when Texas got away with enacting a blatantly unconstitutional law that effectively banned abortion in the state and deputized citizens to turn in other citizens a la Nazi Germany.

The Texas ban was designed to skirt legal challenge and it did. Devious Austin Republicans figured state government couldn’t be sued for an abortion statute it didn’t enforce. So, they gave that job to private snitches motivated by money. In the ultimate denigration of women, Texas lawmakers put a $10K bounty on their heads and encouraged other Texans to snoop on the personal medical decisions made between a woman and her doctor. The same MAGA-pandering men, who holler about individual liberties and bodily autonomy when decrying mandated masks or vaccinations (during a plague) happily slapped draconian parameters on the freedom and bodily autonomy of women.

Yet instead of staying the audacious Texas scheme that flouted four decades of Supreme Court precedent upholding abortion rights, the highest court in the land shrugged and let it stand. Women across the country — and men — were beyond livid. At least the Justice Department refused to countenance such open “defiance of the Constitution” and sued Texas, seeking an injunction to prohibit enforcement of its lawless bounty-driven abortion ban.

But the Texas template for brazenly cancelling constitutional rights and kicking women to the curb is the toast of other Republican-run states, including Ohio, whose similarly severe abortion bans were blocked by the courts as unconstitutional. Ohio Republicans applauded the Texas law and considered options to replicate it or, as some suggested, proactively criminalize abortion outright should the Supreme Court overturn Roe this term and return authority over a woman’s reproductive rights to the states.

Already, legislation introduced in the Ohio Senate this year would automatically ban all abortions in the state, including those performed before a supposed heartbeat is detected (The American College of Obstetricians and Gynecologists has said it’s inaccurate to call these “heartbeat” bills, as the use of the term “heartbeat” does not reflect medical accuracy or clinical understanding. What is interpreted as a “heartbeat” in these bills is actually electrically induced flickering of a portion of the fetal tissue that will become the heart as the embryo develop).

Other bills proposed would criminalize abortion in extreme cases that are all but nonexistent in the state. But none of this political posturing over abortion — or other GOP attack issues — is about advancing serious policymaking grounded in reality. Like their radical counterparts in Texas, Ohio Republicans have plainly sworn off reason to exploit emotion full-time and prey on the feelings of their far-right base. The rest of us be damned.

The party that controls the General Assembly and every statewide office in Ohio is smugly indifferent to what most Ohioans say they want from their state government. Elected Republicans in the state increasingly ignore the general electorate to placate a narrow slice of right-wing diehards they need to win primaries. Despite polls that consistently show a majority of Ohioans believe abortion should be legal all or most of the time, Republican lawmakers are bent on outlawing the procedure entirely.

Despite the overwhelming mandate of Ohio voters to reform the state’s redistricting process with voter-approved changes to the Ohio Constitution — after Ohio Republicans produced some of the most-gerrymandered 2010 statehouse and congressional maps in the nation — the GOP again produced ridiculously skewed legislative districts maps. The blueprint Republicans submitted for state House and Senate seats gives the GOP even more partisan advantage than the egregious maps drawn a decade ago.

“Almost the definition of gerrymandering,” lamented a Cincy political scientist. But this is how Ohio Republicans slyly finagle job security when they can’t win elections the usual way with innovative policy and ideas that improve lives.

They plot to lower voting in the state because too many people participating in elections might dislodge their grip on one-party rule. After record voter turnouts in 2020, at least 18 states with Republican legislatures enacted 30 laws to restrict voting. Republicans who scrambled for an excuse to add burdensome and unnecessary barriers to voting found it in the Big Lie. Even though they boasted about remarkably well-run elections in their states, they insisted more voting hurdles — premised on debunked MAGA lies about voter fraud — would preserve “voting integrity” (in otherwise highly efficient, impartial and problem-free elections). Got that?

The GOP voter suppression sham dressed up as virtue was pushed to the limit in Texas when Republicans rammed through a dangerous and sweeping voter restriction bill designed to make voting harder with a slew of troubling provisions to undermine the process and discourage participation. Ohio Republicans aspire to be like Texas with their own voter suppression proposals that include cutting down on early voting, banning ballot drop boxes and most mail-in voting, and maybe throwing in a forensic audit on the 2020 election for good measure — despite solid GOP victories.

One of the starkest signs that Texas politics is Ohio politics is the willingness of elected Republicans to sacrifice the lives of the majority to appease a minority of MAGA supporters who don’t want to wear masks or get vaccinated. The COVID surge in Texas is so bad, the Republican governor fighting mandated masks and vaccines to stop the surge, is recruiting thousands of out-of-state medical staff to battle rising cases and deaths. In Ohio, where the daily case rates of COVID are 20 times what they were in July, Gov. Mike DeWine thinks mandated vaccines are a mistake and bans on both mandated masks and (all) vaccines remain a Republican legislative priority.

If there is anything that screams for new political leadership in Ohio it is the Republican indifference to a pandemic that has killed over 21,000 Ohioans and is still surging. But don’t kid yourself. Nothing will change if voters don’t wake up to the abhorrent politics Columbus is getting away with — and soon.