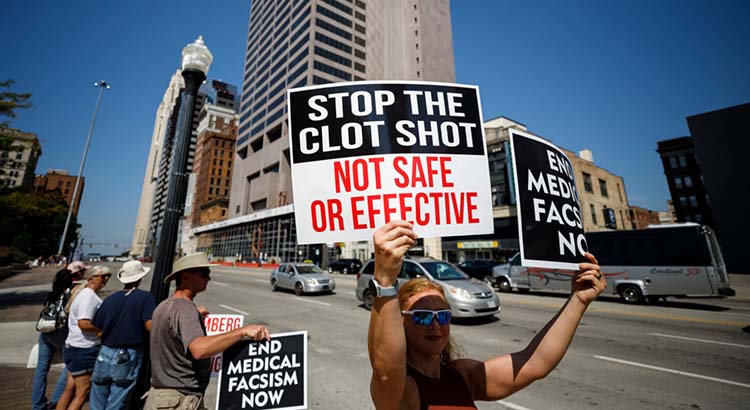 Groups opposed to mandated vaccinations protest on the grounds of the Ohio Statehouse, inside the House Health Committee meets to discuss HB 248 which would prohibit mandatory vaccinations and vaccination status disclosures, Tuesday, August 24, 2021. (Photo by Graham Stokes/Freelance Photographer.)
ShareTweet

Ohio House Republicans have pumped the brakes on what was once turbo-charged legislation aimed to restrict abilities of employers and colleges to require vaccination against COVID-19.

The House Speaker and top lawmakers introduced the legislation Tuesday afternoon with the intent of the whole House passing it Wednesday. The House Health Committee passed it 11-3 on party lines Tuesday.

However, before a legislative session commenced Wednesday afternoon, the bill drew fierce criticism from the health care and business community, and even anti-vaccine activists who said it didn’t go far enough.

The Ohio Children’s Hospital Association, in a statement on behalf of a wide range of health care businesses and associations, said the bill falls short of what the state needs.

“This bill does not address the concerns expressed by the medical, business and university communities about prior proposals of a similar nature,” the statement says. “Protection of an employer’s rights to make decisions in the best interest of their employees and those we serve cannot be overstated.”

Steve Stivers, a former GOP congressman turned CEO of the Chamber of Commerce, said the bill infringes on the rights of employers.

“One-size-fits-all government mandates limiting employer rights are not the right approach,” he said. “It is imperative that we let our businesses manage their workplaces free from government interference.”

The delay reflects the balancing act House leadership is seeking to fulfill on curtailing vaccination mandates, while largely ignoring any attempts at policy solutions to limit the spread of COVID-19 or increase vaccination rates.

Opposition from the Chamber and hospital associations was to be expected; they’ve made similar statements regarding similar, yet broader proposals. More surprising, however, was a statement from anti-vaccination activists with Ohio Advocates for Medical Freedom calling on lawmakers to kill the bill.

In a statement through their Telegram (the group has been intermittently kicked off mainstream social media platforms for spreading misinformation about vaccines), organizers said the legislation would still allow vaccine mandates from employers as well as “discriminatory” actions against unvaccinated people like requiring them to get tested and or wear a mask.

House Bill 435 differs from its predecessors. Unlike earlier proposals, it’s limited to the COVID-19 vaccine; it expires in June 2023; it allows hospitals to mandate vaccination; and it allows employers to impose strict vaccine requirements (no exemptions for “reasons of conscience”) on new hires.

It allows colleges to impose vaccine mandates but requires them to accept exemptions for reasons of conscience, effectively neutering the mandate. It also compels colleges to recognize exemptions due to medical contraindications, religious objections, and natural immunity from prior infection.

While the bill is more moderate than earlier versions, it does virtually nothing to address Ohio’s feeble vaccination rate. Only 65% of Ohio adults are vaccinated, compared to 77% nationwide, according to data from The New York Times. Ohio ranks 10th from the bottom nationwide in terms of COVID-19 vaccination rate.

The bill could rear its head again in the future, in the same or amended form. House leadership sent it to the Rules and Reference Committee, which acts as gatekeeper for legislation en route to the House floor.

The longer the bill stalls, the more its relevancy wanes. The legislation still needs to pass the House and the Senate. Should the Senate make any changes, the chambers would need to reconcile their differences before sending it to Gov. Mike DeWine, who has said in the past he would veto legislation that would hobble state vaccination laws. If he does so, the chambers would need to muster supermajority votes to override his veto, all while navigating Thanksgiving and Christmas recesses. From there, the bill wouldn’t take effect for 90 days.

In an interview after the floor session, Cupp avoided direct answers on what caused the delay or what the road ahead looks like. When asked whether the Ohio House will do anything to improve the state vaccination rate, Cupp said he and his family are vaccinated but left it there.

“I don’t really think the House is the roadblock here,” he said.