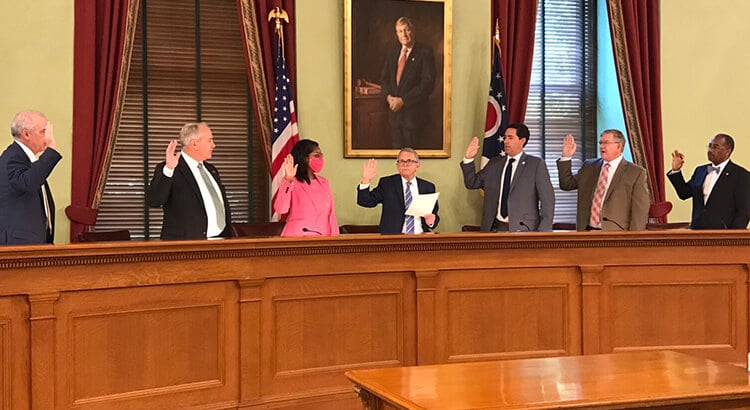 A coalition of groups hoping to eliminate gerrymandering in the state called the Republican majority’s proposed map for district lines a “failure.”

“This map fails disastrously in every way you could possibly measure it,” said Dr. David Niven, political science professor at the University of Cincinnati.

The map was unveiled Thursday morning during one of two Ohio Redistricting Commission meetings held to discuss next steps in the mapmaking process.

The map was criticized first for being unveiled without prior input by the public, and then criticized after review for increasing the partisanship of the districts, according to citizens and commission members.

“In reviewing (the map), it seems that the partisan proportions are worse than what they are existing today, and…that purpose alone is enough for me not to be supportive of this,” said commission co-chair state Sen. Vernon Sykes on Thursday.

The map took its share of lumps during the public hearings, but also from organizations seeking more bipartisan and representative districts.

“There are almost 2 million Black and brown Ohioans who are too often left disaffected and apathetic about the political process because they don’t see themselves represented,” said Jeniece Brock, policy and advocacy director for the Ohio Organizing Collaborative, in a statement. Brock is also the co-chair of the Ohio Citizens Redistricting Commission, an independent board who released their own maps for review.

Now that the map is under consideration, redistricting advocates are hoping the map that results from three days of public hearings and more negotiation before the September 15 deadline will be more representative than they say it does now.

“We do have until Wednesday (Sept. 15) to actually follow the Ohio Constitution,” said Catherine Turcer, executive director of Common Cause Ohio.

The process may not end with the final approval of a map, however, as the coalition leaders say a court battle isn’t out of the question if they feel the constitution still hasn’t been followed at the end.

“The final authority of decision-making is the Ohio Supreme Court if this map fails to correspond to the letter of the constitution, which it clearly does,” Niven said.

Jen Miller, executive director of the League of Women Voters, said the organization “will use every tool in our toolbox,” from the courts to more ballot initiatives to bring about a fair and representational district map.

Miller said court challenges look likely for them with the current map over sections of the constitution that require the map to account for elections results in the districts.

“The statewide proportion of districts whose voters, based on statewide state and federal partisan general election results during the last 10 years, favor each political party shall correspond closely to the statewide preferences of the voters of Ohio,” the state constitution says about General Assembly redistricting.

Questions could also arise about how the map complies (or doesn’t comply) with the Voting Rights Act if the map is passed as it stands, Miller said.

The public will get another shot to give their input on the map at three different public hearings, the first of which is set for Sunday at 4 p.m. in Dayton.