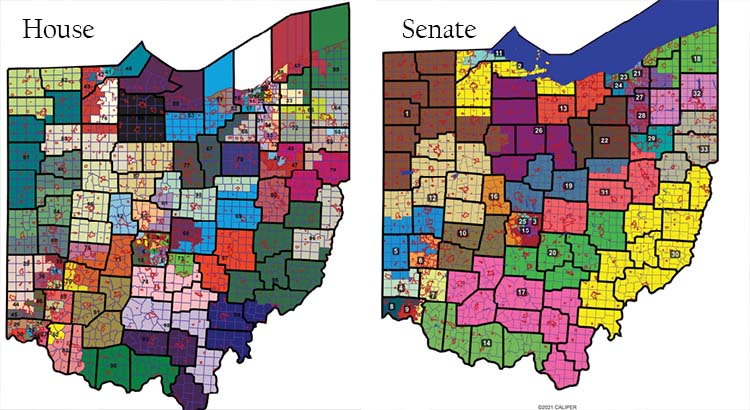 As the public input process begins again for Ohio legislative redistricting, many participants at a Sunday night meeting in Dayton asked for new maps that balance ideologies in the state.

The testimony at an auditorium at Washington Township RecPlex West went on for hours, with much of it mirroring the feelings of the Fair Districts coalition, who said the map the Ohio Redistricting Commission is currently considering “fails” in constitutionality and representational fairness.

Various Ohioans pleaded with the ORC to produce maps that avoid extremist views they’ve heard expressed by some state legislators.

“What you’re doing now is getting rid of all that (election) competition and allowing the crazies and extremists from your party to dictate what happens,” said Matthew Baron-Chapman, of West Chester.

To Gov. Mike DeWine, Baron-Chapman said, “When you make this vote on this map, think about…are you pushing the extremes of your party…or are you going to vote in a way that says I’m looking for people that are looking to build a consensus.”

The ORC accepted GOP-proposed maps on Friday as a “working document,” committing themselves to compromise as the Sept. 15 deadline approaches for legislative maps.

Some Dayton residents and commission members debated how the city should be split in the next legislative map.

“My preference would be to have competitive districts; that would be the priority,” said Dayton City Commissioner Darryl Fairchild.

Commission member and state Auditor Keith Faber conversed with several citizens about whether splitting the city into districts, or keeping the city as compact as possible under the rules of redistricting, would be best for the area.

“If the goal is to draw competitive districts, and the way Ohioans tend to live around people that think like them…it becomes very difficult to get to those kind of ratios without knowing how those competitive seats are going to line up,” Faber said.

The commission will have two more hearings on the proposed map. On Monday, the commission will meet at Corporate College East on Richmond Road in Warrensville Heights at 4 p.m. Tuesday’s hearing will happen at 10 a.m. in the House Finance Room of the Ohio Statehouse, with remote testimony coming from citizens at Marietta’s Washington State Community College.

After the hearings, the commission will meet on the map deadline, Sept. 15, again in the House Finance Room, where they could vote to approve a bipartisan 10-year map or a partisan 4-year map.