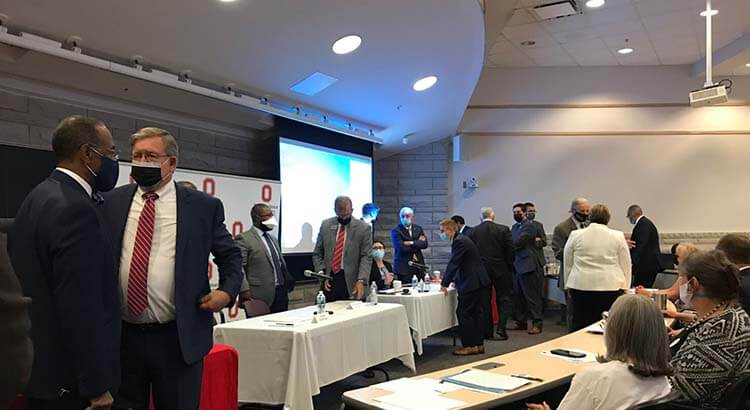 On the left, Ohio Redistricting Commission co-chairs, state Sen. Vernon Sykes and House Speaker Bob Cupp, talk ahead of a commission public hearing in Lima at the end of August. The hearing was one of ten that were held over the course of a week to get public input on legislative and congressional district lines. Photo by Susan Tebben
ShareTweet

The Ohio Redistricting Commission could vote on a map in one of two meetings happening today at the Ohio Statehouse.

The commission scheduled one meeting at 10 a.m. in the Finan Hearing Room, and another for 2 p.m. in the same room.

On the agenda, the ORC said it “will meet to hear testimony on state redistricting plans and conduct other business,” according to a notice sent out Wednesday morning.

A spokesperson for Senate president and commission member Sen. Matt Huffman, R-Lima, confirmed the GOP caucus would be presenting a map at the morning meeting, and that the map would be a part of the 2 p.m. meeting as well.

A vote on a commission map could take place on Thursday as well.

The Senate Democratic Caucus introduced a proposed map at the ORC’s last hearing on August 31, which was also the day before the first deadline for the commission to formally introduce a map. As that deadline expired, a new deadline of Sept. 15 was automatically triggered.

As for when the constitutionally required three hearings on the commission-introduced map would take place, that’s still unconfirmed. Huffman’s spokesperson, John Fortney, told the OCJ dates for those hearings have “yet to be announced by (commission) co-chairs.”

A member of commission co-chair and state Sen. Vernon Sykes’ office also said dates for the public hearings have not been confirmed, though discussions are ongoing.

Multiple requests for comment were left with fellow commission co-chair and House Speaker Bob Cupp’s office, but none were returned.

The timing of the entire process has been under scrutiny by redistricting and voting rights groups throughout the state. Katy Shanahan, state director for All On the Line, said bypassing the Sept. 1 deadline and presenting maps in the week before the next deadline does not fit with the transparency Ohioans asked for in a ballot initiative that changed the way redistricting was regulated.

“Rather than spending the last seven months adequately preparing for this process, the Republican-led Commission has instead dragged their feet,” Shanahan told the OCJ on Wednesday. “And now, Ohioans — whose voices are largely being shut out of this rushed process — will pay the price.”