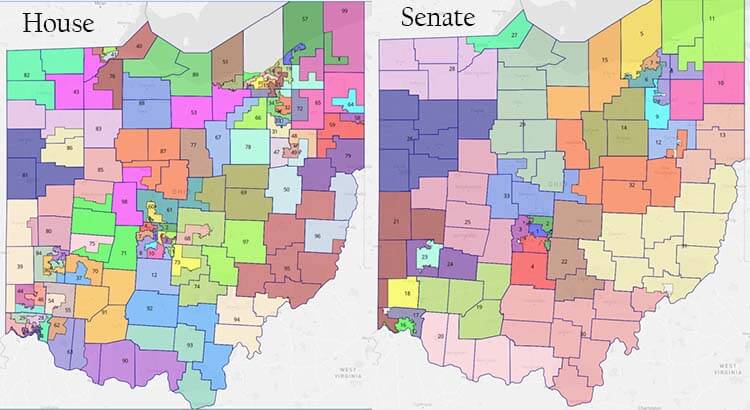 The state legislative districts as proposed by the Democratic caucus on Monday.
ShareTweet

Another long haul of testimony bookended the introduction of an new redistricting map for Ohio on Monday.

The two Democratic legislators on the ORC, state Sen. Vernon Sykes and House Minority Leader Emilia Sykes, brought up the House and Senate maps at the second of three public hearings for input on how legislative districts should be drawn in the state.

Vernon Sykes said the newly-proposed map was presented “for transparency’s sake” and in an effort to introduce public input into the maps.

“We want to amend to encompass some of the considerations and discussions that have taken place,” said state Sen. Vernon Sykes, co-chair of the ORC, at Monday’s meeting in Warrensville Heights.

The maps represented work from both the House and Senate Democratic caucuses.

A vote was not requested to accept the Dem map over the GOP-introduced map on Monday, but one could be held at the commission’s third public meeting on Tuesday, or at their official meeting, scheduled to happen on Wednesday morning.

The Democrats, specifically the Ohio Senate Democratic Caucus, previously offered up another proposed map at the end of August, before the GOP map was proposed and accepted as the “working document” for the commission.

On the new amendments, Dem staffer Chris Glassburn said they took all constitutional rules into consideration, and drew the maps in compliance with the Voting Rights Act, along with maps of public citizens and anti-gerrymandering organizations.

“We have taken those maps very seriously in our caucuses, we have listened very carefully to what you have said,” Glassburn told meeting attendees and commission members.

Partisan competitiveness was taken into account, Glassburn said, but not in a way that made it “superior” to any other measure.

The map considered election results for the last ten years, and would give Democrats 42 House seats and 13 Senate seats, according to Glassburn. In the House, for example, 20 of the 99 legislative districts would have between a 45% and 55% partisan lean, making them competitive. Districts would remain non-competitive in the 79 other districts of the state.

With the September 15 deadline looming, the commission has mere days to finish negotiations on a new map to last, if bipartisan, 10 years, and if not bipartisan, four years.

Gerald Barna, an Avon resident and one of the rare Republicans to publicly speak at these events, said communities with shared interests should be kept together, and the commission should be able to do that work in time.

“I urge the commission – the Democrats, the Republicans — to work together in good faith, willing to make compromises and come to the conclusion of a 10-year plan,” Barna said. “Otherwise, it will be absolutely destructive to the state and harmful to its citizens.”

Akron resident George Bohan, III, acknowledged that he was a Democrat living in a safely Democratic district with the current maps on the books. But he would rather see his district become competitive, rather than see any districts with unresponsive lawmakers.

“In safe districts, legislators don’t have to listen to their constituents,”Bohan told the commission on Monday.

House Minority Leader Emilia Sykes said she hopes the Dem maps will receive even more feedback as the public hearings go on and the process continues.

“As we go through the next two days, I do encourage the members of the public…to communicate with us where you’d like to see edits,” Sykes said.

A third meeting is scheduled for Tuesday morning, and the following day, an official meeting of the ORC will happen at 10:30 a.m. on the day of the map approval deadline. If a map is approved, it could still face legal challenges, particularly if the GOP-produced map is named the official redistricting map.