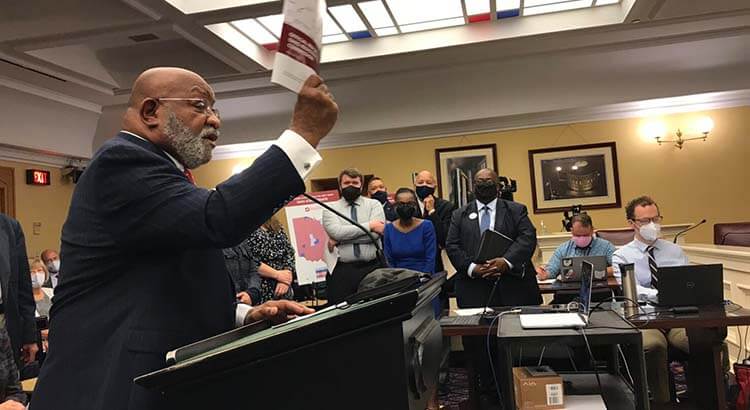 The day before the deadline for legislative redistricting efforts in Ohio, there were no indications that agreement on a map was close.

In fact, in a public hearing held Tuesday at the Ohio Statehouse, some citizens conceded that an extension to the deadline could be beneficial, and some Ohio Redistricting Commission members agreed.

“Yes, you should have started this process earlier…but here we are,” said Mia Lewis, of Common Cause Ohio. “Let’s all acknowledge a very obvious thing: This is too important a task to be rushed.”

The commission showed up that morning after a six-hour hearing that ended late Monday night. Much of the testimony was similar, expressing outrage at GOP-created maps, and giving examples of specific parts of their communities they feel will be disenfranchised by those maps.

“We demand better services from our politicians,” said the Rev. Derrick Holmes. “Doing what is fair is not an act of favoritism.”

The independent Ohio Citizens Redistricting Commission made a full presentation of their maps at the hearing, with political science professor emeritus Dr. Richard Gunther giving his seal of approval on the so-called “unity maps.”

“These maps meet every one of the criteria set forth in the Ohio Constitution since it was revised in 2015,” Gunther said.

He should know, since he helped draft what become the constitutional amendment that regulates redistricting as Ohio knows it now.

Several of the Citizens Redistricting Commission members pushed for the unity maps to be included in considerations for statewide maps.

Samuel Gresham, Jr., OCRC commission member and chair of Common Cause Ohio, said current maps and currently proposed GOP maps deny citizens an opportunity for representation and the legacy of the legislators and members of the commission rides on the resolution of the maps.

“If we have to stay with a (partisan) four-year map, I want you to remember there will be two elections during that time,” Gresham said.

Asked whether he thought the GOP or Dem maps could be adapted to align with the unity maps, and create an acceptable map, Gresham had a simple answer.

Yet another political science professor, Dr. David Niven, spoke to the official redistricting commission for a second time, saying the Democratic map was better than the GOP-created map he’d said “fails disastrously,” but still not the best map Ohio could get.

“The alternate map (by the Dems) continues to waste more Democratic votes than Republican votes,” Niven said on Tuesday.

He said there was a natural “geographic bias” in Ohio — the idea that voters who live near each other tend to vote similarly — but that only accounts for a bias of about 3%. In the Democratic map, he calculated a partisan bias of about 7%, and said the Republican map showed a bias of about 14%.

The meeting didn’t technically end when testimonies stopped. Auditor of State Keith Faber interrupted commission co-chair Vernon Sykes as he appeared to be ready to adjourn, suggesting that the meeting be recessed, to be brought back at the call of the chair.

Asked what progress could be made on Tuesday, Faber said discussion on everything from “starting points” to “proportional representation” still needed to be had.

“We continue to have discussions and working with various map options to the extent that we could have a map amendment today,” Faber said Tuesday afternoon.

House Minority Leader Emilia Sykes said she is prepared to compromise to get to a 10-year map, and is hopeful Republican members of the commission will be as well.

“My job as a legislator is a little bit different than some of the advocacy groups, because yes we certainly hold hard lines and strong lines, but we also have to find a way to get to a 10-year map, and that does require some compromise,” Sykes said.

Some commission members have said they would accept missing the deadline if it meant a better map, though advocacy groups like the League of Women Voters did not support an extension.

“I think the people of Ohio would prefer that we come together and get a 10-year map even if that’s a few days after the deadline of the 15th,” Secretary of State Frank LaRose said. “Timeliness matters, but I think quality in this case matters even more.”

The commission is set to meet Wednesday morning, the current agenda of which is to “consider adoption of the Commission’s introduced General Assembly redistricting plan.”