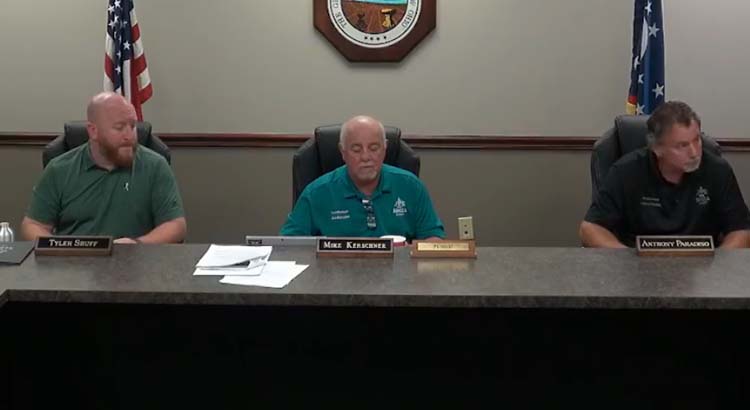 Tiffin, Ohio — The Seneca County Board of Commissioners unanimously adopted a plan for the future of ambulance services in the county Thursday morning after viewing a PowerPoint presentation prepared by Seneca County Emergency Services Director Ken Majors.

The PowerPoint was split into two parts. Half of the presentation recaps the current situation in an attempt to simplify the discussion around the issue. The final half of the PowerPoint outlines a three-squad, full time model with additional part-time and volunteer-staffed ambulances. This portion of the presentation summarizes Majors’ August 2021 update to the Seneca County EMS Operational Plan which is titled “We are better together.”

Majors said the county plans to move to a full-time, paid ambulance service for anyone in Seneca County not covered by another agency. The plan takes a system of volunteers that is supplemented by paid personnel and flips the arrangement. Majors said there is no plan to get rid of volunteers.

“We will have them for as long as they are willing and able to help,” he said, adding that there could be opportunities for that pool of people to get paid more by being reclassified.

Board President Mike Kerschner said the goal of the plan is to provide high-quality (Advanced Life Support) prehospital care in 10 minutes or less to everyone in the service area.

Majors said the reason the county has discussed this plan over the past year is that volunteerism is in decline, locally and across the country. This has led to increased out-of-service figures. In 2014, Seneca County EMS had a roster of 140 volunteers. Today, that number has dwindled to about 74, with roughly 37 going on at least one run per month.

“The volunteers are getting the job done today, but it is not sustainable for the long-term,” Majors said. He said the county can accomplish these goals by better leveraging existing funding streams and using them more efficiently.

At the beginning of 2021, the joint ambulance districts and northern townships had more than $1.4 million in reserves/carryover funds collected through EMS levies. This funding legally must be used for ambulance services. This, coupled with an increased financial commitment from the county and potential access to millions of dollars in federal American Rescue Plan Act funding has led to an opportunity to solidify the future of emergency medical services in the county, Kerschner said.

“I think it’s time for action,” Commissioner Tyler Shuff said. “We’ve been talking about this for 10 years … let’s start getting the buildings up. If you’re in, you’re in. If you’re out and you want to go your own way, that’s your prerogative. But, you’re going to have a better service if we work together.”

Three ambulances (one in each geographical area) would be paid 24/7/365 Advanced Life Support squads, with a combination of part-time paid and volunteer personnel filling in the other squads. The system would also include the continuation of a volunteer squad in New Riegel, that could have part time paid assistance to ensure no out-of-service time.

Majors said his plan would retain the Echo paramedic, which is one paramedic in a special response vehicle that responds to all calls and provides leadership and training.

The commissioners each noted that the specifics of the plan are likely to change. Those specifics depend heavily on which joint ambulance districts and other political subdivisions agree to partner with the county in this endeavor.

However, the commissioners all supported the general ideas outlined in the plan.

He also said he hopes to have an answer to if the joint ambulance districts are willing to join the county’s new system by the beginning of November.

The commissioners are to meet with local leaders and stakeholders at 7 p.m. on Oct. 7 at the North Central Ohio Educational Service Center to continue the discussion on the future of EMS.

Also on Thursday, following recent maintenance issues with several ambulances, the commissioners agreed to order a second truck for Seneca County EMS. The first ambulance, which was ordered earlier this year, is expected to be available at the end of the first quarter next year. The second ambulance, which the commissioners approved funds for Thursday should be available in the second or third quarter of 2022. Each ambulance costs about $227,000.

In other business, Mental Health and Recovery Services Board of Seneca, Sandusky and Wyandot Counties Executive Director Mircea Handru spoke to the commissioners about the addition of Ottawa County to the board.

He said all involved approved the move about 2-3 months ago before recently having a comprehensive plan approved by state officials. Handru said the addition of Ottawa will not affect the other three counties financially, as all levy funds generated in Seneca County will only be used for services in Seneca County.

“I have not heard any resistance to the merger,” he said.

The merger becomes official on Friday, and at 10 a.m. at 315 Madison St., Port Clinton, a Media Day event is to be held to discuss the merger and answer questions from media representatives.

In other action, the commissioners heard an update from Seneca County Common Pleas Court Judge Steve Shuff about probation services. He said in the past, probation services were handled and funded through the federal Adult Parole Authority Program. Shuff said Seneca is one of just eight counties that still rely on the APA and have recently been pushed to take on probation services at the local level. Thanks to the most recent two-year state budget, the program is to be grant-funded the next couple of years at about $684,000 annually. Shuff said the county is to contract with Oriana House to handle probation services for about 240 felons and 60 drug cases.

Kerschner said it is important to begin lobbying for continued state funding in the next two-year operating budget because, without those funds, the county would be required to pick up the expenses.