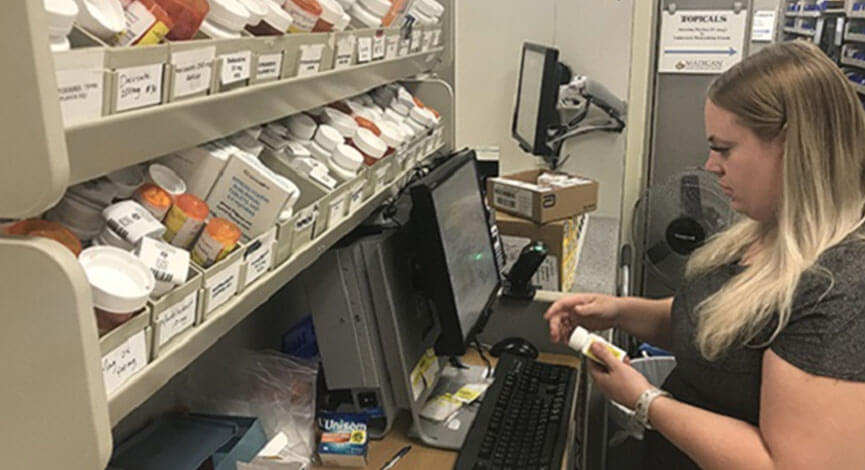 Now the corporations that own them appear to be creating yet another layer of middlemen. That has even the largest employers in the country worried.

The operators of a regional chain of pharmacies based in this town along the Ohio River have long complained that the reimbursements they receive from the powerful middlemen are strangling their ability to stay in business.

Especially in the Appalachian hills of Southeastern Ohio and in the rolling hills to the north in Amish country, low payments by middlemen through the state Medicaid program have already driven many community pharmacies out of business and threaten many more, the businesses say.

Some of them believe the new middlemen who are being added will only make things worse.

“You’re taking an industry that already has a middleman and you’re adding yet another middleman and the incentive for both of these middlemen is to extract the highest value for their corporation, which will invariably force the cost of drugs up,” said Lynne Fruth, whose Fruth Pharmacy has stores in West Virginia, Ohio and Kentucky.

The three largest pharmacy benefit managers — CVS Caremark, OptumRx and Express Scripts — are said to control more than 70% of their marketplace and they’re owned by corporations that are among the nation’s 15 largest.

The companies manage pharmacy benefits in part by negotiating rebates with drugmakers and by determining how much to reimburse pharmacies — even though they are pharmacy owners themselves.

Pharmacy benefit managers, or PBMs, have leverage with drugmakers because they control health plans’ formularies — the lists of which drugs are covered by insurance and which get favorable treatment.

Since the PBMs represent tens of millions of patients, drugmakers have a powerful incentive to play ball. They routinely give PBMs discounts on brand-name drugs that can range from 30% to 80% off the list price.

With ever more — and more expensive — wonder drugs coming onto the market, that can amount to a lot of money.

The PBMs have steadfastly maintained that the rebates, discounts and fees they collect from drugmakers benefit patients and plan sponsors. But many others aren’t so sure.

Because the transactions aren’t transparent, suspicions abound that a lot of the money is being hoovered up by the big PBMs.

That is a stance with which the big PBMs adamantly disagree.

But their actions might have spoken differently earlier this month when an industry group sued to stop a Medicare rebate-transparency rule implemented late in the Trump administration. The industry group, the Pharmaceutical Care Management Association, argued that if it had to disclose net prices, drugmakers would use that information to make the PBMs, and everybody, pay more.

While that proposition remains to be tested, rebates have been shown to increase the prices that at least some pay for drugs.

Research published last year by the University of Southern California’s Schaeffer Center indicated that every $1 in rebates can be associated with a $1.17 increase in list prices. That means that if you have to pay the cash price or a deductible or coinsurance, you likely have to pay based on those rapidly inflating list prices — and not enjoy part of the discounts and fees PBMs are getting from drugmakers and partially passing along to insurance plans.

Those high costs can be detrimental to physical as well as financial health. Patients with high deductibles and coinsurance have been shown to be less likely to buy and take their medications.

“I think it’s harder for people to maintain their health because they’re having to pick and choose the drugs they take,” said Denise Giambalvo, vice president of the Midwest Business Group on Health, which advises businesses that insure a combined 4 million people.

As the three big PBMs fight in court to stop the rebate-transparency rule, each has started up a new company to occupy a space in the supply chain. Interestingly, two aren’t even based in the United States.

The companies have been called purchasing organizations, rebate aggregators or contracting entities. As those names suggest, they’ll negotiate rebates and contract with drugmakers on behalf of their affiliated PBMs.

The goal, the businesses say, is more savings for customers.

It continued, “For example, GPOs help PBMs to use scale and leverage to more aggressively negotiate with (drugmakers) to lower the cost of drugs for clients and consumers. The core mission of PBMs is to provide improved access to needed medications by lowering costs.”

Some of the industry’s biggest customers are skeptical. They worry that the new companies will serve as another black box in which the health care giants can hide the discounts and fees they collect from drugmakers.

“From our perspective, we definitely have questions about adding an entity into the mix in the supply chain. Is that going to make it that much harder for us to track where these rebates are actually going?” asked James Gelfand, senior vice president of the ERISA Industry Committee, or ERIC.

The group has 120 member companies, the smallest of which employs 10,000 people. Together, the companies purchase insurance for 10 million people, he said.

For Gelfand, the PBMs’ justification for creating the new entities doesn’t seem to wash.

“Our understanding has been that the PBMs get better rates from the drug companies because they’re buying in bulk,” he said. “You’ve got three PBMs that represent more than 75% of the market, so they’ve got so many covered lives, they’re going to buy so many drugs, that’s going to get them the very best rates.

“But now we’re hearing that to get the best rates, they need to create these group-purchasing organizations. It’s just a little bit hard to understand why this is necessary now compared to what we thought had been happening.”

PBMs and drugmakers often snipe at one another about who’s to blame for increasing drug costs. The drugmakers increase list prices, but they say they do so to accommodate PBM demands for ever-deeper, non-transparent discounts.

“Now middlemen are creating middlemen to make the system even less transparent and less accountable to patients,” Sarah Sutton, a spokeswoman for an industry group, the Pharmaceutical Research and Manufacturers of America, said in an email. “Unfortunately, these factors are often ignored in the drug pricing debate, even though they are directly related to the costs people pay when they go to the pharmacy.”

That not only creates concerns about further concentrating power in the PBM marketplace. It also creates worries that amid growing health care costs, there will be even more “vertical integration” in the health sector. That means corporations dominate not just one marketplace, they also own businesses that can give advantage to their other enterprises.

For example, since 2014, each big PBM has bought or been acquired by a company that also owns a major insurer: CVS-Aetna, UnitedHealth-Optum and Cigna/Express Scripts. Health insurers hire PBMs, so it seems likely that affiliated PBMs have a leg up when those decisions are made.

Also, the PBMs determine pharmacies’ drug reimbursements. CVS competes with those pharmacies in the retail sector and all three operate mail-order pharmacies for the most expensive class of drugs — which the PBMs often require to be filled through the mail.

Now UnitedHealth Group owns about 5% of the nation’s doctors offices with plans to add more.

That means a UnitedHealth-insured patient could go to a UnitedHealth-owned doctor’s office and be prescribed an expensive specialty drug. Optum, United’s PBM, could then decide whether the drug is covered and collect a rebate through Emisar, United’s new group-purchasing organization. Then the same patient might be encouraged to fill that script at a United-owned, mail-order pharmacy.

In other words, UnitedHealth Group could be profiting from every one of those transactions, and one might wonder if controlling costs would be its first priority.

The Federal Trade Commission, one of the federal government’s trust-busting watchdogs, this year said it will scrutinize the vertically integrated corporations that own the big PBMs. But it declined to discuss the new group purchasing organizations.

“Sorry but the FTC wouldn’t comment on/speculate on whether it intends to investigate a particular company or group of companies,” spokeswoman Betsy Lordan said in an email Monday.

Gelfand, whose organization represents the largest employers, said that hospitalization remains employers’ biggest health cost, but prescription costs are the fastest-growing. And, since employers in his group typically pay 80% of premiums, they’re feeling the increase acutely.

With about half of employees now on high-deductible plans, members of the group worry they’re paying more money for less health care.

“We’re deeply concerned about people not getting their medications,” Gelfand said. “This happens all the time, people get sticker shock at the pharmacy counter and they just don’t fill the script. From our standpoint, what is the point of paying billions of dollars for benefits if it doesn’t provide the protections the beneficiary needs?”

Health care costs are so high, the big employers are now saying it drains the economy and makes them reluctant to hire — and cover — new workers, Gelfand said. Because they have a legal responsibility to be good stewards of employee insurance premiums, he said they’re going to continue the legislative fight to bring more transparency to pharmacy middlemen, whether they’re called PBMs or group purchasing organizations.

“Employers are on the line because we’re fiduciaries,” Gelfand said. “We can’t continue with the current situation in which we’re being told, ‘Oh trust us, you’re getting a good price’ when, in reality, many times we’re not. It’s become completely untenable.”