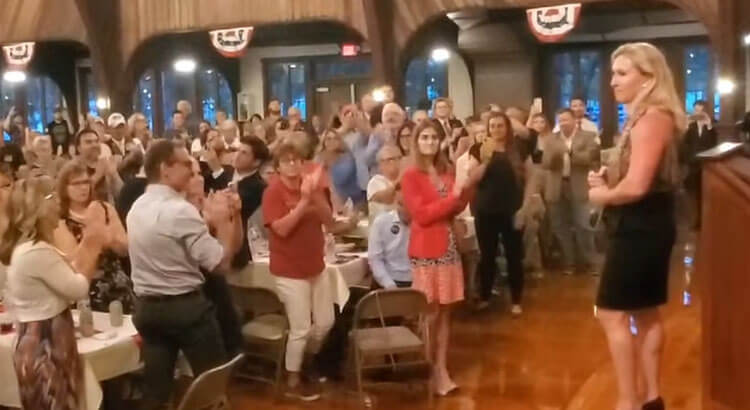 Bascom, Ohio — The Seneca County Republican Party hosted a fundraiser event at the Meadowbrook Park Ballroom in Bascom on Friday, where they welcomed a slate of far-right political candidates, and even a QAnon-affiliated seditionist, as speakers.

An insider source who was in attendance tells TiffinOhio.net that the crowd was “smaller than the organizers expected.”

“They were expecting 600 people, but they barely broke 200,” the source, who spoke on the condition of anonymity, told TiffinOhio.net.

The internal divide surrounding the event within the Seneca County Republican Party was on full display last week, as former party chairman David Koehl, who is currently serving on the party’s central committee, told the Advertiser-Tribune he was “kept mostly in the dark about details” of the fundraiser.

Koehl told the newspaper that the event’s keynote speaker, U.S. Rep. Marjorie Taylor Greene (R-Georgia), a far-right extremist with a history of spreading racist and anti-Semitic conspiracy theories, was paid a $10,000 speaking fee and at least $5,000 in travel expenses by the local party committee.

“It’s probably going to her campaign committee, not to her personally,” Koehl told the A-T.

Koehl’s claims, however, were repudiated by Vanessa Treft, one of the main event organizers who serves as women’s chair for the Seneca County GOP.

“As Seneca County chairwoman this is not correct. We are NOT paying her,” Treft claimed in a Facebook comment.

Treft, along with Susan Platt, are “leading their own faction” within the local party, the source said.

The divide between more moderate, “establishment-type” Republicans and far-right, pro-Trump supporters has even led to two separate Facebook pages being maintained for the local party.

A page titled “Seneca County Republican Party” is operated by the “establishment” faction and primarily focuses on local events and announcements for the party. Another page, titled “Seneca County GOP,” is allegedly maintained by Treft and Platt, and frequently shares misinformation and conspiracy theories.

During the Bascom fundraiser, Greene announced that she has filed articles of impeachment against President Joe Biden in response to the withdrawal of American troops from Afghanistan.

“I have filed articles of impeachment on Joe Biden,” Greene said as the crowd erupted in applause, with some chanting “MTG, MTG!”

What she didn’t mention at the event, however, is that the impeachment resolutions have little chance of advancing. As with many of Greene’s maneuvers, the resolutions seem primarily aimed at boosting her fundraising numbers.

In addition to Greene, J.R. Majewski, a QAnon-affiliated seditionist who was among the mob of pro-Trump supporters who stormed the U.S. Capitol during the January 6 insurrection, delivered remarks.

Majewski went on a brief rant about being featured in a TiffinOhio.net story outlining his history, and seemed confused as to whether or not he in fact has a history of touting QAnon conspiracies.

“I can tell you, I made the Tiffin news today because I’m a QAnon supporter, supposedly,” Majewski said. “Yep, me and Marjorie Taylor Greene, front page, baby. You got that right. For all you candidates out there, you know, stay away from J.R. Majewski. He’s too America for you.”

While talking about his journey to Washington, D.C. for the January 6 insurrection, Majewski said he’d “do it again.”

“We had a blast. We didn’t do anything illegal, we supported our president,” Majewski said. “And I would do it again, and twice on Sunday. Because that’s what America is all about.”

After painting his lawn, then-President Donald Trump praised Majewski, and Fox News interviewed him about his yard while he was wearing a QAnon shirt.

According to Media Matters for America, Majewski claimed in multiple tweets to have organized resources to bring Trump supporters to the January 6 Capitol insurrection.

“I’ve provided $20k amongst Trump supports [sic] and arranged travel for them over a 72hr period to travel to DC,” Majewski tweeted on December 30. Multiple Twitter users also credited Majewski for helping them travel to Washington, D.C., for January 6.

In a January 6 video posted to the DLive and Twitch streaming platforms, Majewski and a well-known QAnon influencer dubbed “RedPill78” described their experience at the insurrection and admitted to breaching police barricades and walking to the base of the Capitol.