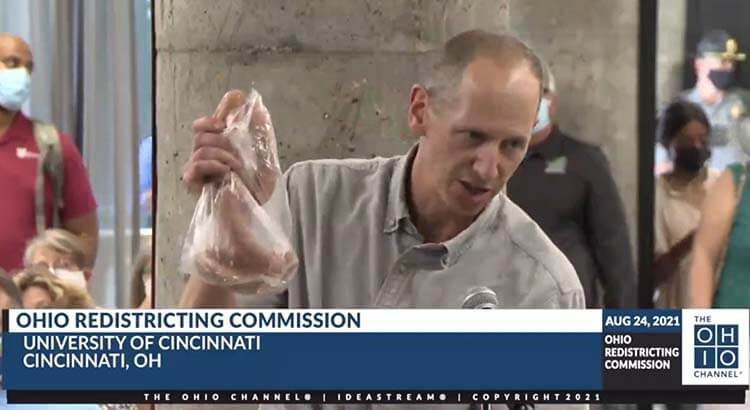 Jeff Wise, of Wyoming in Hamilton County, holds up a sausage as a visual aid for the process of redistricting. Wise spoke at the Cincinnati public hearing for the Ohio Redistricting Commission on Tuesday. Photo from The Ohio Channel.
ShareTweet

There was a lot of talk about sausage at the Ohio Redistricting Commission’s Cincinnati public hearing on Tuesday. But no goetta was served.

In the fourth of 10 planned public hearings on gerrymandering in the state’s voting districts, members of the Cincinnati area asked that there be changes made not only to the new district maps, but to the process as a whole.

“When Ohio voters saw the 2011 batch of sausage, we spat it out,” said Jeff Wise, a resident of Wyoming in Hamilton County. “What we need to do is try to get a scorecard to try to get the best sausage.”

Those that spoke in meetings held in Dayton on Tuesday morning, Cincinnati on Tuesday afternoon, Zanesville on Wednesday morning and Rio Grande that afternoon all acknowledged that the process wasn’t an easy one, especially considering the tangle of districts that came before this redistricting effort.

Only Tennessee has a more complicated map, Niven said. But with Ohio’s current map, he said a flip of a coin would land in Republicans’ favor, even if it landed on its side.

Niven joined others at the Cincinnati meeting and every other meeting thus far in emphasizing how much public input mattered in the process.

Many attendees to the Redistricting Commission hearings have accused commission members, particularly those who sent designees rather than attending every meeting themselves, of not giving the process the respect it needs.

One of those designees was state Sen. Jay Hottinger, R-Newark, who attended the Zanesville meeting where many in his constituency spoke. Hottinger stood in for Senate President Matt Huffman, R-Lima.

“I think it’s important for us to hear the individuals, and to hear what their concerns are, and I think they spoke with a pretty single voice,” Hottinger said after the hearing. “Wanting to have fairness, wanting to have transparency, wanting to have accessibility.”

Hottinger said he has not seen any proposed district lines, formally or informally, but said there are certain parts of the map-drawing process that cause some neighborhoods to be split without partisan intention. While he said he didn’t defend other district layouts, the 31st district that he represents makes up whole counties, for the most part.

He said if those four townships were included, his district would be considered too large under district map rules.

“When you have five counties almost in their entirety, that’s not a widely gerrymandered district,” Hottinger said.

State Sen. Vernon Sykes, D-Akron, who is co-chair of the commission with House Speaker Bob Cupp, R-Lima, said on Wednesday that this week’s meetings are “initial” hearings, and more would be scheduled after maps were actually proposed.

“We’re not trying to call out anyone on this, we’re not challenging you,” Sykes said. “This is not a debate and we’re not expecting you to challenge us other than what we’ve been sworn to do.”

At Wednesday’s hearing in Zanesville, the OCJ asked Faber the same question, and Faber denied that he or his staff had met with any staff or member of the commission about formulating maps.

“We have had no private meetings with any members of the commission,” Faber said, a statement corroborated by a member of his staff in a later email to the OCJ.

LaRose was not in attendance at the Zanesville meeting to address the question.

The sausage-making discussions continue for the rest of the week, including Thursday hearings in Lima and Toledo. Times and locations of meetings, along with methods to submit testimony, can be found on the Ohio Redistricting Commission website.