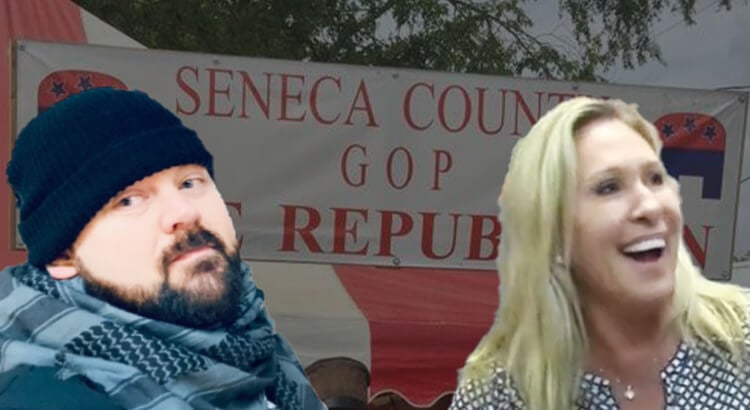 But “MTG,” known for promoting several white supremacist and anti-Semitic conspiracy theories, isn’t the only controversial figure who will be featured as a speaker at the event.

J.R. Majewski, a Toledo native and QAnon conspiracy theorist who was among the mob of pro-Trump supporters that stormed the U.S. Capitol on January 6, is also expected to deliver remarks at the Seneca County GOP Judicial Fundraiser.

The event is set to begin Friday at 6:30 p.m. at the Meadowbrook Park Ballroom in Bascom.

The QAnon conspiracy theory started with an initial promise in 2017 that Hillary Rodham Clinton would be imminently arrested. Since then, a broad group of interpreters divined a conspiracy that saw Donald Trump’s Democratic opponents as a global cabal of Satanic pedophiles.

After painting his lawn, then-President Donald Trump praised Majewski, and Fox News interviewed him about his yard while he was wearing a QAnon shirt.

According to Media Matters for America, Majewski claimed in multiple tweets to have organized resources to bring Trump supporters to the January 6 Capitol insurrection.

“I’ve provided $20k amongst Trump supports [sic] and arranged travel for them over a 72hr period to travel to DC,” Majewski tweeted on December 30. Multiple Twitter users also credited Majewski for helping them travel to Washington, D.C., for January 6.