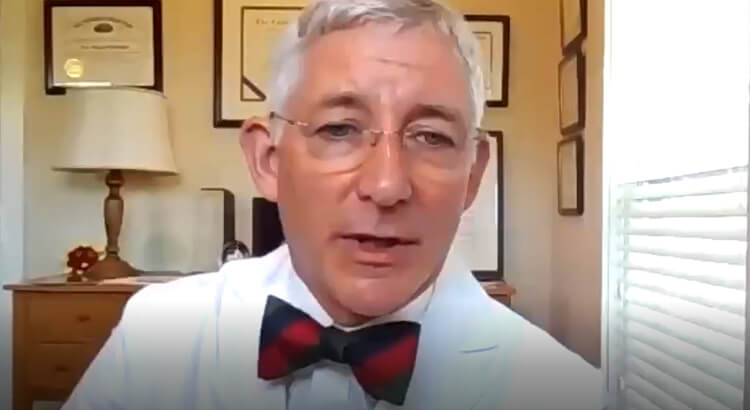 The United States has more than enough coronavirus vaccine and more than enough masks, yet the refusal to mask up and get vaccinated is driving a fourth wave of infection that is again crowding intensive-care units, including those for children.

But Ohio Health Director Bruce Vanderhoff on Thursday said that instead of re-imposing mask mandates, the state should instead rely upon “the citizenry.”

As it is in many other states, the delta variant of the coronavirus is rampaging through Ohio, with the state reporting 3,272 new cases on Wednesday alone.

Perhaps more alarmingly, the number of cases per 100,000 Ohioans is approaching 200, after being just under 18 on July 7. That’s more than an 11-fold increase in just five weeks.

Fortunately, so far there is still capacity in intensive care units in the Buckeye State. That’s in contrast to Arkansas, which has just eight. Hospitals in Texas and Florida also are reporting that they’re overwhelmed.

But hospitalizations are a lagging indicator, even in the face of a variant that Vanderhoff says is “much, much more contagious and seems to be able to make people sicker quicker.”

Some states are reimposing mask mandates in indoor public spaces. Ohio Gov. Mike DeWine lifted such a mandate in May.

But on Thursday, Ohio’s health director said that in his professional opinion, the time for such mandates has passed.

“I think that the reality is that in any health event, in anything that has been going on for a long while — and this pandemic has been with us now for a long time — we reach a point in the pandemic where we really do need to rely on the citizenry,” Vanderhoff said. “We need to rely upon the personal responsibility and judgment of communities and leaders of communities to make the best decisions, but arm them with the tools to do so.”

Vanderhoff might be following the lead of DeWine, who this week promoted Vanderhoff from chief medical officer at the Ohio Department of Health’s to director.

While being blistered from his right by last year’s coronavirus health orders, DeWine engaged in a bruising battle with his fellow Republicans in the General Assembly. They passed a bill placing severe limits on the governor’s ability to issue health orders. He vetoed it. They overrode his veto.

The governor, who faces reelection next year, late last month said that he wouldn’t try to reimpose a mask mandate because, “There’s not the appetite in this state today for that type of mandate,” WBNS 10tv reported.

It’s important to note that the poll asked respondents whether they supported or opposed such mandates by local governments, so they might respond differently if asked about state mandates.

Interestingly, the governing class seems to be out of step with public opinion on vaccine mandates. The opinion poll found that 56% supported local vaccine mandates for all but the medically exempt, compared to 37% who were opposed.

For his part, Vanderhoff on Thursday kept up the drumbeat for Ohioans to get voluntary vaccinations and to voluntarily mask up in public settings such as schools. Saying, “we have a staggering amount of clinical and safety data” on the vaccine, Vanderhoff added that getting it is the surest way to protect yourself and those around you.”

That — and fear spurred by the new wave of infections —might be getting through to the vaccine hesitant.

“In recent days we’ve seen more than 10,000 Ohioans choosing to start the vaccination process daily and another 5,000 completing their vaccine series,” he said. “This is all movement in the right direction.”

That’s still far, far fewer than the 108,000 shots a day when the vaccine started to become widely available in March As of Thursday, just over half of Ohioans had at least started the vaccine.

With daily case counts spiking to levels not seen since last winter, it might not be the most effective approach to rely on Ohioans’ personal responsibility and judgment to slow the increase as winter approaches.

Steven Burdette, an infectious disease doctor at Miami Valley Hospital, said the vast majority of the people he’s caring for now haven’t gotten the shot, even though it’s been widely available since May.

“Our COVID intensive care unit is full of people who are unvaccinated,” Burdette said. And, unlike those he was seeing last winter, these aren’t nursing home patients. “We’ve got patients born after 2000, several who were born (in) the ’90s, several born in the ’80s, a whole bunch born in the 70s and it’s very different from what we were seeing before.”

State data show that while more than 80% of Ohioans older than 65 have at least started getting vaccinated, less than half of those younger than 40 have.

And while the younger patients are less likely to have conditions that combine with COVID to kill, they can still find themselves in real trouble, Burdette said.

“If you are young and healthy and you get bad COVID and it affects your lungs and you go on a ventilator, your chances of coming off the ventilator unfortunately are not good,” he said.

He added that going unvaccinated endangers entire families, including children under 12, who are ineligible to be vaccinated.

“What I see clinically is it goes through families,” Burdette said. “Almost invariably when I see somebody in my ICU or in my stepdown unit, everybody at home is sick and the parents of the kids are not vaccinated.”