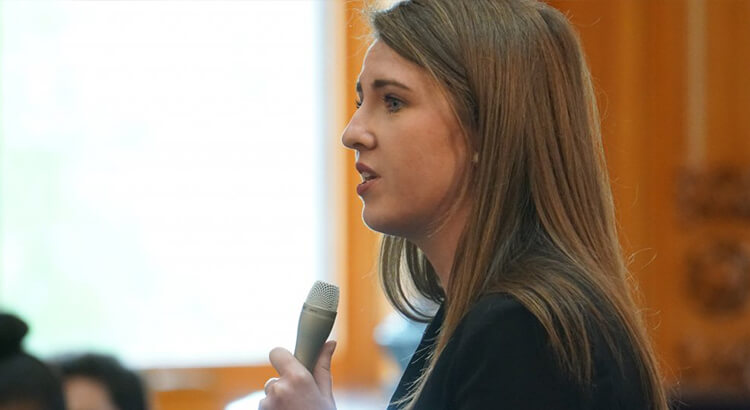 A Cleveland lawmaker is hoping to protect voter outreach programs that may be in danger of being outlawed in future Ohio elections.

The state budget approved earlier this summer includes a number of provisions that voting rights advocates have characterized as anti-democratic. Among them is a prohibition on election officials collaborating with any nongovernmental entity to promote voter registration or any other voting education program.

Election officials will also be barred from receiving any donation from outside the government to use for election-related purposes, such as buying equipment or conducting training.

But advocates say a plain reading of the provision would implicate such programs and dampen government efforts to register and educate new voters.

“That is clear as day. You don’t have to be a lawyer (to understand it),” Rep. Bride Rose Sweeney, a Cleveland Democrat, said in an interview.

Sweeney has introduced House Bill 380, nicknamed the “Election Engagement Restoration Act,” with support from 19 other Democrats in the Ohio House of Representatives. It would repeal the above provision as well as another new item preventing public officials from entering into legal settlement agreements that conflict with the Ohio Revised Code.

🍻”Beer is proof that God loves us and wants us to be happy.”🍻

Some dispute it, but this bit of wisdom is often credited to Ben Franklin.

Either way — our Raise a Glass to Democracy initiative is proof that we love voters and it’s easy to become one at https://t.co/TI8p9denz4! pic.twitter.com/OUmdmX8BnW

Sweeney said past election lawsuits have led to important settlements to improve voting access. Camille Wimbish, the election administration director for Ohio Voice, called the effort to restrict these settlements a “legislative overstep.”

Ohio Voice is part of the Ohio Voter Rights Coalition that sent letters in opposition to a number of budget provisions dealing with elections and the redistricting process.

The Coalition scored a victory when Gov. Mike DeWine vetoed a provision that would have given Republican leaders the sole opportunity to intervene in potential gerrymandering litigation. GOP lawmakers are considering a vote to override this veto later this year.

‘Surely it was not their intent to criminalize…’

Sweeney said much of the legislative concern against outside donations to Ohio election officials stems from money given last year by Facebook CEO Mark Zuckerberg and his wife, Priscilla Chan.

She pointed out there are already guardrails in place when it comes to private funding of government activities. The Ohio Controlling Board provides a “check and balance” between the separate branches of government, with legislators on the board approving the Zuckerberg donation given to the secretary of state’s office. The bipartisan vote to accept the money was unanimous.

The budget provision, inserted by Republicans, goes further by outlawing any such donation in Ohio — even those with support from the legislative and executive branches. Sweeney called the prohibition “irrational” and ironic, given colleagues’ usual support for public-private partnerships and in saving taxpayer money.

In a provided statement, a spokesperson for LaRose reiterated the belief that voter education programs would continue under the secretary’s tenure.

“We shared the legislature’s concerns about outside money being distributed unequally across counties and worked with them to develop language that will prohibit nongovernmental sources from funding election-related activities without appropriate oversight,” LaRose’s press secretary Rob Nichols stated in an email. “And while we appreciate the concerns of the voting rights groups about the language the General Assembly ultimately adopted, surely it was not their intent to criminalize the typical kinds of voter registration and get-out-the-vote activities that Secretaries of State of both parties have historically done over the years.”

Sweeney complimented LaRose’s work during the 2020 election cycle and said it may be true the Republican-led Ohio General Assembly will not oppose the efforts of a fellow Republican leading the secretary of state’s office. She expressed concern that could change if a Democrat is elected to LaRose’s position.

“If it wasn’t the legislative intent to end these collaborations, let’s pass my bill then,” she said.