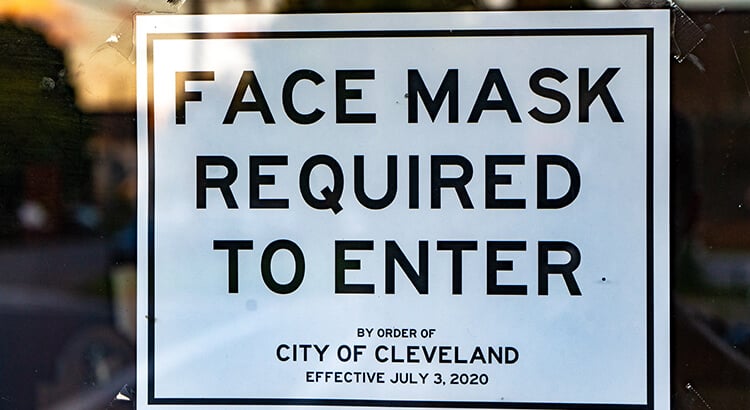 Then Gambier, a small village of 2,400, mandated masks indoors in town — where one of the district’s elementary schools happens to exist.

Finally, the sheriff said neither he nor his deputies would enforce the law.

Hospital rolls are once again swelling, a trend attributed to the hyper-transmissible delta variant of COVID-19 running amok through unvaccinated communities. Less than 51% of Ohioans are vaccinated, and doses are not yet authorized for use on those 11 and younger — most of whom are returning for a new school year in the coming weeks.

“From our perspective, we would not have gone forward with this if we thought it was not defensible in court,” said Gambier Mayor Leeman Kessler.

Gambier is in Knox County, where the vaccination rate (less than 38%) sags far behind the state level. It’s a dot of liberal politics in a deep red county. If Kessler is correct on the legality of the ordinance, the politics are another question entirely.

The Knox County Sheriff’s Office, which Kessler said is solely responsible for police work in Gambier, wrote on Facebook it would not enforce the ordinance and will “not put deputies in this situation.” Sheriff David Shaffer did not return a phone call.

“If this mandate keeps our village safe, keeps our schools safer than they would have been without, then yes,” Kessler said when asked if the ordinance would be worth the blowback. “If we’ve gone through all of this for nothing, it’s hard to say. But based on the science and recommendations from all the professional health organizations … this is the course of action that is most recommended.”

In Athens, another blue city in a generally red area of the state, the city council passed an indoor mask mandate of its own, as The Athens NEWS first reported. City law director Lisa Eliason, in an interview with the Ohio Capital Journal, said the city built its policy around the recommendation of its local health department.

The ordinance is legal, she said, and makes sense from a public health perspective given the number of unvaccinated students (only 44% of 20-29 year-olds are vaccinated) soon to flood Athens and its crowded bar district.

“You still have Home Rule authority from the Ohio Constitution in matters of health and safety,” she said. “That’s what Athens is relying on.”

Other cities have joined in. Yellow Springs, a small village near Dayton, imposed a mask mandate at an Aug. 9 council meeting. The city fire chief and police chief both backed the proposal at a council meeting.

Oxford considered a mask mandate at its city council meeting Tuesday evening, but could not pass it at the time due to absent members. One absent member, Chantel Raghu, was out tending to his parents, both of whom were hospitalized with COVID-19, according to a letter read on his behalf at the meeting.

“If my parents were not both struggling with COVID, I would be at home, in the meeting, making the commonsense vote yes to keep our community safe by indoor masking,” he wrote.

The towns are correct in that Senate Bill 22 still allows them to pass mask mandates through their city legislative bodies — the law only applies to their departments of health, according to Micah Berman, a professor of public health law at Ohio State University.

“Extending that limitation to city councils, depending on how it was written, might well violate the Home Rule amendment of the Ohio Constitution,” he said.

“But health departments are creations of state law, so their authority can be more easily limited by the legislature.”

Last summer, Ohio cities started to impose a patchwork of mandates around the state, eventually mounting enough political pressure on (or political cover over) Gov. Mike DeWine to impose a statewide mask mandate.

It’s too early to tell if the cities are trendsetting once again, or if the mandates remain confined to the modest list seen thus far, according to Keary McCarthy, executive director of the Ohio Mayor’s Alliance. He offered a more lukewarm take on whether cities can impose mandates.

“I think that is certainly something that is open to interpretation,” he said. “What was prescribed in [SB] 22 wasn’t exactly crystal clear.”

Cities harbor dense populations of people — ideal conditions for a communicable disease. Similarly, they stand to lose huge dollars in tax revenue if COVID-19 spread forces businesses to keep their workers remote and out of reach from taxation of the former site of work, he said.