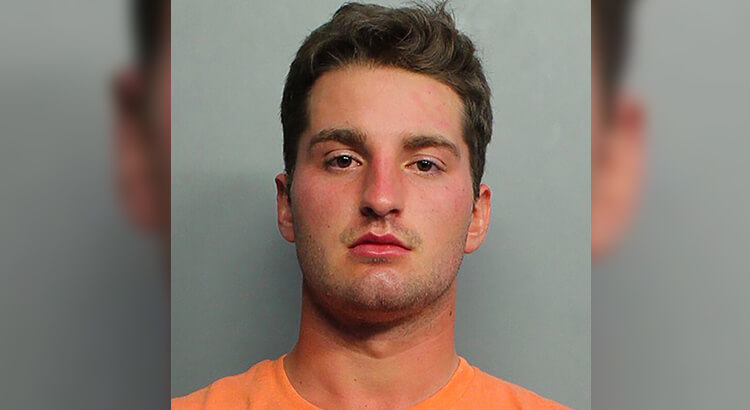 A Norwalk, Ohio man on a Frontier Airlines flight was duct-taped to his seat after allegedly groping two flight attendants and assaulting another, according to a report.

22-year-old Maxwell Berry was on a flight from Philadelphia to Miami the afternoon of July 31, according to the Miami-Dade County Police Department.

Berry then allegedly spilled a drink on his shirt and went to the restroom before coming out shirtless, according to the report. He then walked around the plane for about 15 minutes before groping the chest of two flight attendants, police said.

Another flight attendant, who took over watching Berry following the previous incidents, asked him several times to calm down and remain seated. Berry then reportedly punched that flight attendant in the face, according to the report.

That’s when other flight attendants who were nearby sprung into action and eventually taped Berry to his seat, tying him with a seatbelt extender for the remainder of the flight, police said.

Berry was arrested when the flight landed and faces three charges of battery.

Frontier Airlines released a statement regarding the incident: “During a flight from Philadelphia to Miami on July 31, a passenger made inappropriate physical contact with a flight attendant and subsequently physically assaulted another flight attendant. As a result, the passenger needed to be restrained until the flight landed in Miami and law enforcement arrived. The flight attendants will be, as required in such circumstances, relieved of flying pending completion of an investigation.”