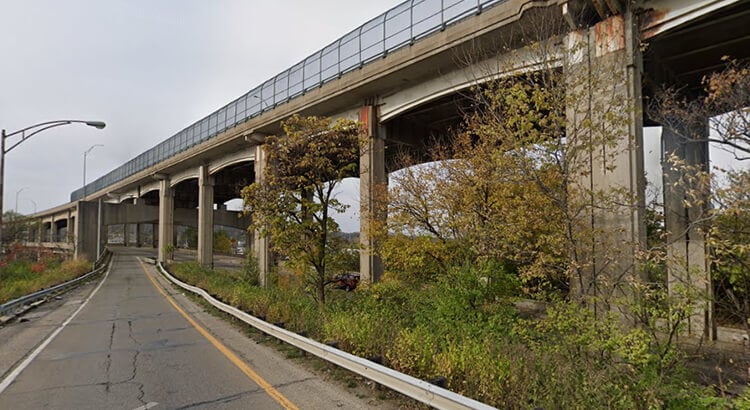 A new infrastructure bill set to be voted on this week in the U.S. Senate comes as a relief to Howard Krueger and his windshield.

Krueger was driving south on I-75 in Hamilton County, off to help his sister as she recovered from chemotherapy treatments. As he rolled along the lower level of the Western Hills Viaduct, down came a large piece of concrete, creating a spider web of cracks in his car’s front windshield.

“It dropped onto my windshield, it stunned me, it scared me,” Krueger said on a Wednesday press call.

To the chagrin of other drivers on the road, he got out of his car to search for the piece of bridge material that had hit his car. He searched for a work crew on the upper part of the bridge, thinking it may have been accidental debris from maintenance work. There was no one to be found.

“In simple terms,” Krueger said. “I experienced first-hand a safety issues… and I’m sure that’s not the only viaduct or bridge (with safety issues).”

With money set to come from the infrastructure bill to be used for bridge repair, Krueger and Ohio Democratic U.S. Sen. Sherrod Brown hope priority will be made in the state for aging projects like the viaduct and Cincinnati’s Brent Spence Bridge.

“There is great potential here,” Brown said. “This is a recipe for jobs.”

That help for bridge maintenance is necessary according to an American Society of Civil Engineers report in 2020. The report said of the more than 617,000 bridges in the country, 42% of them are at least 50 years old, and 7.5% of them are considered “structurally deficient.”

“At the current rate of investment,” the report said last year, “it will take until 2071 to make all the repairs that are currently necessary, and the additional deterioration over the next 50 years will become overwhelming.”

The White House release state-specific information on the impact of the infrastructure bill, saying Ohio “would expect to receive $9.2 billion for federal-aid highway apportioned programs” along with $483 million over five years for bridge replacement and repairs.

If the infrastructure bill passes, the state could receive $1.2 billion over five years to improve public transportation options as well, according to the White House fact sheet.