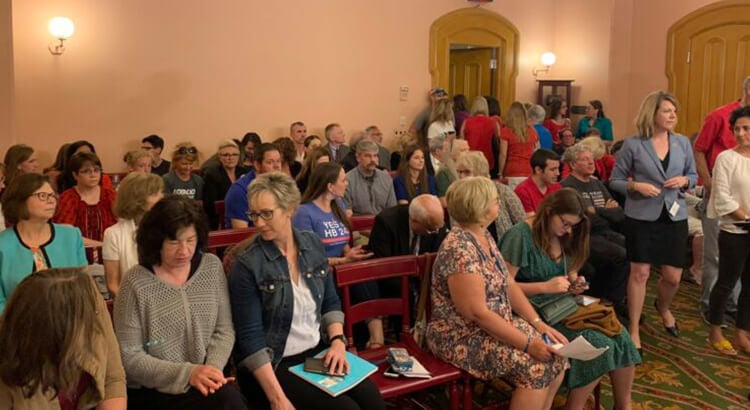 When Dr. Sherri Tenpenny told a hearing of the Ohio House Health Committee that the COVID-19 vaccine magnetized people, not only was she relaying scientifically unfounded and false claims about the vaccine, she was also contributing to an ongoing skepticism of her profession.

Tenpenny — who was invited to speak that day by an Ohio legislator who authored anti-vaccine legislation — is one of the “disinformation dozen,” as the Center for Countering Digital Hate labels 12 people who use their large social media following to share information that critics say amounts to spreading lies about COVID-19 and creating harm to public health. In addition to Tenpenny, the list includes two other doctors of osteopathic medicine (DOs).

“It was disheartening to see that there were these three DOs using these large platforms to misinform the public instead of to relay science and data,” said Tyler Russell.

Russell is starting his first year as a medical student at Ohio University’s Heritage School of Osteopathic Medicine. He spent five years in the Army, and when deciding what to do for the rest of his life, he said he wanted to choose a career that would impact the lives of others on a daily basis.

“I wanted to choose a job where I could really truly promote the common good,” Russell said.

It was that common good that informed Russell’s decision to join what is now 81 other medical students, doctors, staff and faculty on a letter to the Cleveland-based Tenpenny and fellow DOs, Dr. Rashid Buttar of Charlotte, N.C. and Dr. Joseph Mercola of Coral Gables, Fla.

“Your dangerous propaganda angers and embarrasses us,” the letter states. “We must continually explain to family members and friends that you are irresponsible outliers taking these positions for personal gain, and do not represent the broader, educated osteopathic community.”

It continues by calling the words of Tenpenny, Buttar and Mercola “dishonorable,” and states their work “stands in stark contrast with the honorable and even heroic work of of those osteopathic physicians who have been on the frontlines of the U.S. COVID-19 response.”

The letter was drawn up because the students and their doctor-professors thought that the three wouldn’t be treated as individual physicians with individual opinions, but as messengers for the greater osteopathic profession, something that MDs don’t have to worry about as much.

“DOs have struggles with the perception of quackery,” said Dr. Stevan Walkowski, chair of OU’s Osteopathic Manipulative Medicine Department. “Public perception, perception amongst (MDs), perception among the media, it all leads to difficulties in establishment of a clear identity.”

Osteopathic medicine has been treated by some as a “new-age” type of medicine, despite the fact that DOs receive largely the same training as MDs, but with manipulative medicine and holistic treatments added into the mindset.

The first school for the profession started in the late 1800s, but it wasn’t until the mid-20th century that MD and DO licensure was equalized. Still, the profession had to wait until the early 1990s for DO medical board examinations to be accepted in all 50 states.

Many DO practices, including in Ohio, focus on medically underserved areas, which is what attracts students to the profession, said Andrea Brunson, assistant director of student affairs for HCOM in Dublin.

“These students care quite a lot about public health. They are strong advocates for medically underserved populations,” Brunson said. “Students that are in osteopathic programs are, by and large, interested in community-based medicine.”

So even now that the profession is accepted as parallel to MDs in the medical world, some in the profession, like Tenpenny, are giving out bad information when it comes to a global pandemic, professors say, making those teaching DOs and their students have to work harder to prove themselves.

“At the end of the day, the important point is my students work their butt off to become physicians, and these (people) are out there making it more difficult,” said Dan Skinner, associate professor of health policy at OU.

Though Tenpenny and the others may be the vocal minority, they shouldn’t be ignored, Skinner said.

“I see them having rather large bullhorns,” Skinner said. “The truth is they reach a lot of people.”

Though Russell is just starting out in his medical school tenure, he hopes getting a message to doctors passing along misinformation can be a part of ensuring his community betters the world.

“We ask (Tenpenny, Mercola and Buttar) to please use their platform to encourage Americans to get vaccinated, to put this pandemic behind us,” Russell said.

Tenpenny did not respond to requests for comment from the OCJ. A staff member at Buttar’s Advanced Medicine & Clinical Research office in North Carolina said he was out of the country. He did not respond to an email requesting comment.

When Mercola was asked if he had a response to the HCOM staff and student letter, he did not confirm or dny receiving the letter, but discredited any organization that cited the “disinformation dozen” report.

“My concern is making sure the truth is told,” Mercola wrote in an email to the OCJ on Thursday. “I will continue to recommend individuals fully educate themselves when it comes to medical risk-taking and taking control of their health.”

Mercola owns the Mercola Market in Florida and mercola.com, where he sells supplements, pet care and personal care products. The U.S. Center for Food Safety and Applied Nutrition issued Mercola a warning letter in February requesting that he cease sale of “unapproved and unauthorized products for the mitigation, prevention, treatment, diagnosis, or cure of COVID-19.”

The warning letter said Mercola’s statements about the effects of the products “misleadingly represent them as safe and/or effective for the treatment or prevention of COVID-19.”