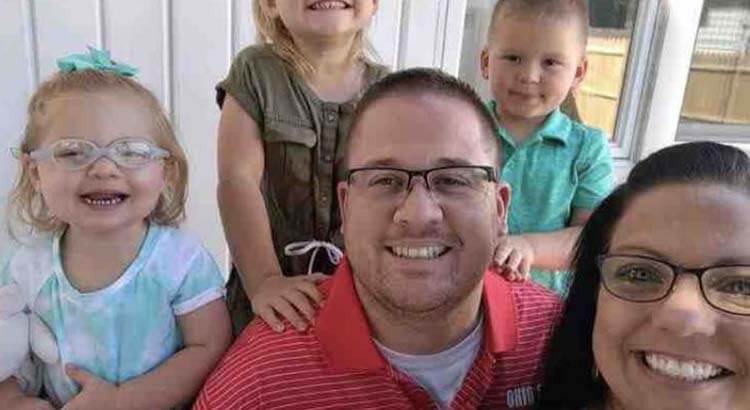 Fremont, Ohio — An online GoFundMe page has been established to support the family of a Lakota Raiders football coach who was killed Friday in a two-vehicle crash.

38-year-old Jonathan D. Ottney, of Fremont, was the defensive coordinator for the varsity football team at Lakota High School.

“Jon was truly a devoted family man who would do absolutely anything for his wife and children,” the GoFundMe page states. “He is survived by his amazing wife Sarrah and their 3 children Farris (5), Davis (4) and Jersee (3).”

The Ohio State Highway Patrol says Ottney was driving eastbound on County Road 41 at approximately 10:21 p.m. Friday when he was struck head-on by another vehicle.

After the impact, both vehicles came to rest on the south side of County Road 41.

The driver of the other vehicle, 18-year-old Logan J. Graham, of Helena, was transported to Saint Vincent’s Hospital in Toledo and is in critical condition. Ottney was pronounced dead at the scene, and the right front passenger in Graham’s vehicle, who was identified as a minor, was also pronounced dead.

“He was committed to his Lakota Raider players on and off the field and his loss will be felt for years to come,” the GoFundMe states. “The purpose of this fund is to help alleviate immediate and future expenses for the Ottney family and provide for their children for major expenses such as future education. Although Sarrah is very strong and would never ask for for any type of handout, Jon would have wanted nothing more than to make sure his family was taken care of in his absence. This is just a fraction of the memorial that Jon deserves, to honor his memory and say our last goodbyes.”

The GoFundMe page for Ottney can be accessed by clicking here.