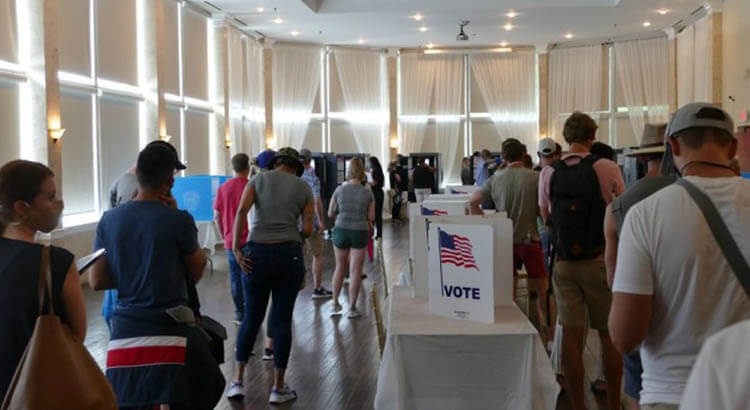 A top Justice Department official on Monday stressed the need for Congress to pass  legislation named after the late Georgia civil rights icon Rep. John Lewis in order to protect voting rights across the United States.

Assistant Attorney General for the Civil Rights Division Kristen Clarke told lawmakers that since a 2013 Supreme Court decision that struck down Section 5 of the Voting Rights Act of 1965, the DOJ has been unable to block the passage of restrictive voting laws.

“Restoration of the Voting Rights Act is a matter of great urgency,” she said during a virtual hearing of the House Subcommittee on the Constitution, Civil Rights, and Civil Liberties.

The bill, known as the John Lewis Voting Rights and Advancement Act, or H.R. 4, has not yet been introduced in this Congress. But it is expected to establish a preclearance section of the Voting Rights Act that would require all 50 states to get special permission from the Justice Department before making any changes to voting laws or putting in place new voting requirements.

The Voting Rights Act put in place a preclearance formula for nine states and a handful of counties and cities with a history of discriminating against Black and voters of color.

“The tidal wave of voter suppression that the nation currently faces comes as no surprise—it is (an) entirely predictable result of the Supreme Court’s 2013 decision,” the chairman of the panel, Rep. Steve Cohen, (D-Tenn.), said.

The hearing comes ahead of House Speaker Nancy Pelosi’s plans to bring the bill to a floor vote next week. The House Judiciary Committee is still in the process of writing up the legislative text.

The recent overhauls of voting laws passed following the 2020 presidential election in several states such as Georgia, Florida and Montana, have alarmed congressional Democrats.

Republicans on the committee argued that Democrats were creating a false panic and that the Supreme Court made the correct decision in 2013 to strike down the preclearance Section 5 of the Voting Rights Act.

The flurry of voting legislation stems from the 2020 presidential election, after which former President Donald Trump continued to spread the falsehood that the election was stolen from him.

Clarke said that since the Supreme Court struck down Section 5, the Justice Department has seen laws enacted that cut early voting, purged eligible voters from voter rolls and placed new restrictions on voting.

She added that when Section 5 was in effect, the Justice Department was able to block more than 3,000 discriminatory voting changes “that otherwise would have taken root.”

“Without (Section 5) the Justice Department has lost its most important tool with safeguarding voting rights,” Clarke said.

Republicans also argued that H.R. 4 was not necessary because there is no voter discrimination in the U.S., compared to the 1960s.

But the dozens of hearings that House Democrats have held on voting rights and discrimination that voters of color have faced have contradicted those arguments.

The House subcommittee on elections recently released a 124-page report that outlines the U.S. history of discrimination in voting and how ID requirements, closure of polling places and long voting lines, among other problems, disenfranchise voters of color.

Democrats say the report will help the Judiciary Committee with drafting bill language for H.R. 4.

The Senate is similarly working on its own voting rights package that Senate Majority Leader Chuck Schumer, (D-N.Y.), said he plans to bring to the floor for a vote when senators are back from their August recess.