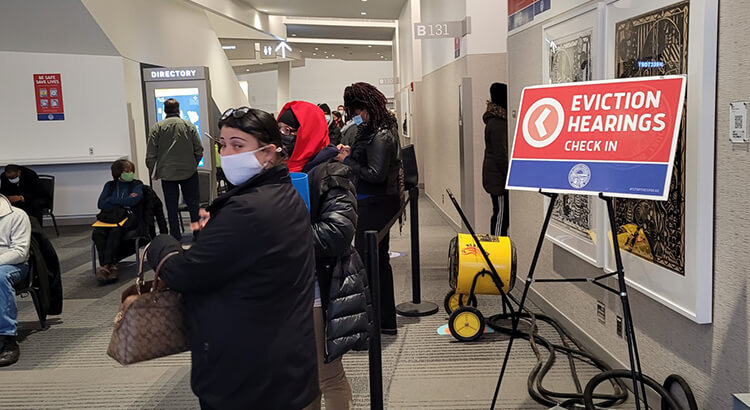 The liberal and moderate wings of the Democratic Party are at odds over President Joe Biden’s decision to allow an eviction moratorium to expire last weekend. The situation reportedly has become so tense, the factions looked headed for a split. By late Tuesday, Biden had announced an order for a continued moratorium in areas hardest hit by COVID-19.

But back in Ohio, a leading housing advocate said a complete moratorium never really existed and that thousands of evictions have been going forward here all along. The important thing now, he said, is to get money to tenants and landlords to keep people housed and to rapidly re-house those who have already been put out — especially as the coronavirus seems headed into a deadly new phase.

“I think it’s pretty much over,” said Bill Faith, executive director of the Coalition on Homelessness and Housing in Ohio. “There’s not much more to be done except they keep blaming each other.”

He was referring to a moratorium on evictions issued last year by the U.S. Centers for Disease Control and Prevention. The agency said a rash of evictions of the newly unemployed would only exacerbate the pandemic by forcing people out of their homes and into settings where they’ll mix with a lot more people — either in the houses of family and friends, shelters or on the streets.

The Biden White House said that it appealed to the CDC to extend the moratorium, but the health agency’s attorneys could find no legal basis to do so. Later Tuesday, there were reports that the administration would take new action to limit evictions, but details weren’t immediately available.

For Democratic progressives, however, the dispute extends beyond the moratorium. It’s also about concerns that Biden is taking them for granted as he navigates a Congress where he finds limited support from some in his own party and very little from Republicans, the Washington Post reported.

Faith said that while progressives fear a sudden rush of evictions, they’ve been taking place in Ohio throughout the pandemic.

In fact, evictions were robust enough last year that just before Christmas, scores in Columbus were crowding into the Greater Columbus Convention Center each morning for eviction court — despite worries about spreading the virus in the absence of a widely available vaccine. According to Princeton University’s Eviction Lab, of Ohio’s three biggest cities, only Cleveland’s eviction filings now are far below pre-pandemic levels.

Faith said that in some courts, judges granted eviction orders, but they’ve delayed “setouts,” orders requiring tenants to leave. It’s hard to know from where and how many of those orders might be coming.

“Those cases are being held at the courts and could be released at any time,” Faith said. “So they could go ahead and do the setout through the sheriff’s office or however they do it in their county and that worries me. I have no idea or no way to know how many of those kinds of  circumstances are pending, but I know there’s a lot.”

Congress passed a $25 billion emergency rental assistance program in December and money from that has been slow to make its way to people who need it — although the U.S. Department of the Treasury announced progress on that front late last month.

To learn where to turn in your county for help, go to the COHHIO website here.