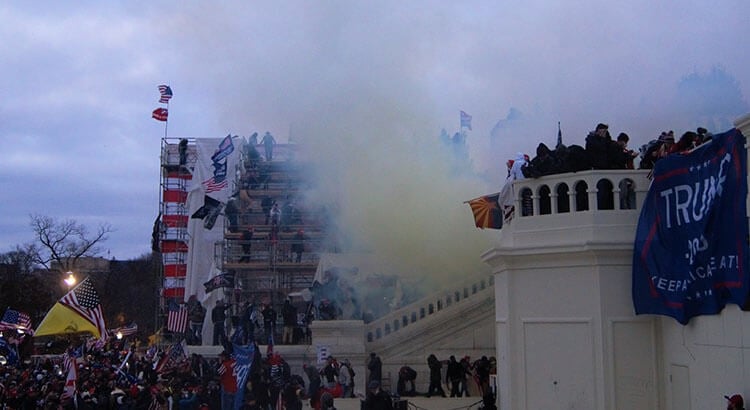 Tear gas is seen outside the United States Capitol during a violent attack by pro-Trump rioters on January 6, 2021. (Photo by Tyler Merbler via Flickr CC BY)
ShareTweet

Congress on Thursday overwhelmingly passed $521 million to reimburse the National Guard for providing 26,000 troops to protect the Capitol after the Jan. 6 riot — an unexpected expense that was poised to result in training cutbacks for Guard units across the country.

The National Guard Bureau used its budget to pay for the mission at the U.S. Capitol, covering the costs of state National Guards deploying support to Washington, D.C., for riot response and President Joe Biden’s inauguration. The Capitol was attacked by supporters of former President Donald Trump on the day Congress met to certify the winner of the 2020 election.

Most troops returned home after several weeks, but some remained on Capitol Hill through May as concerns about security remained.

While those unexpected costs dragged on, Congress did not approve more money to backfill the National Guard’s operational budget, leaving a shortfall for the final months of the budget year.

As a result, money that state Guard units needed in August and September to pay for drill weekends, annual training, and other operations and maintenance was no longer available.

Told that those federal dollars would not be flowing, state units have been scrambling to prevent guard members from losing pay.

“Without reimbursement funding, there is significant impact on National Guard readiness if we’re not able to resolve this in a timely manner,” Chief of the National Guard Bureau, Army Gen. Daniel Hokanson, said in a statement ahead of Thursday’s vote.

The emergency funding was ultimately included in a $2.1 billion supplemental security bill, which also included additional money for the Capitol Police and for a special visa program for Afghan refugees who had aided the U.S. mission there.

The Senate voted 98-0 on Thursday to pass that bill, and shortly after, the U.S. House of Representatives also gave its approval on a 416-11 vote.

“By passing this bill, we have honored the service of the Capitol Police and the National Guard with the funding they need,” said Rep. Rosa DeLauro, (D-Conn.), chairwoman of the House Appropriations Committee. “And we have sent a clear message that we respect the hard work they do.”

The measure now heads to the president’s desk for his signature.

A White House statement said the Biden administration “strongly supports” the National Guard funding in the measure, saying it “would enable the National Guard to continue its military training activities for the remainder” of the fiscal year.

The National Governors Association said as a result of Thursday’s votes, states will no longer be faced with tough financial decisions on canceling training sessions or deferring equipment maintenance.

But the group said the late timing did mean that some smaller training events had already been canceled.