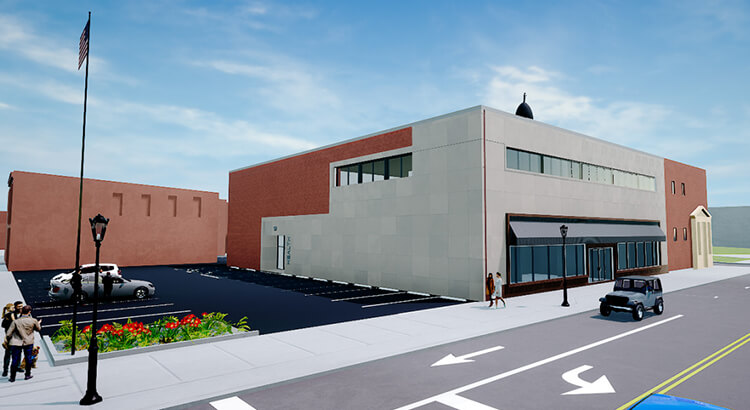 Tiffin, Ohio — The Seneca County Board of Commissioners received an update Thursday morning on the County Services Building project from a DLZ Architect.

Greg Galieti, of DLZ, shared renderings of the proposed project, which includes upgrading a pre 1865 wall of the building, the parking lot and the entrance to the Seneca County General Health District.

The CSB, located at 71 S. Washington St., is home to Seneca Regional Planning Commission, Seneca County Board of Elections and the health department.

The county has been working with DLZ on the project since June of 2019. The next step in the process for the project is for Galieti to take the renderings and plans in front of the Downtown Tiffin Architectural Review Board. The board is scheduled to meet again on Sept. 7. After that, Galieti is hopeful that the county can put the project out for bid.

You can see the renderings at this link.

In other business, County Administrator Stacy Wilson provided clarification in response to recent comments made during Tiffin City Council meetings about federal American Rescue Plan funding. Some have commented that the county doesn’t know what to do with the $10.7 million allocated to it. Others have also falsely suggested that the county governs the townships.

“We have no more control over the townships than we do the city of Tiffin or Fostoria,” Wilson said. “They have their own elected officials; they make their own decisions.”

The funding through the ARP is eligible to be appropriated through 2024.

“It’s quite the contrary that we don’t know what’s going on with it,” Board President Mike Kerschner said. “We’ve talked about a priority list. We are trying to apply that money as best we can throughout the county.”

Kerschner mentioned ambulance services and buildings and grounds as possible areas that the funding is expected to be used. A committee has been formed of various county officials to consider and prioritize requests for the ARP funding. A rough draft priority list has more than $10 million of potential projects and that is before the application process has been opened up to departments across the county. The county employs about 600 people.

On the sales tax front, which typically makes up more than half of the county’s General Fund revenue and is seen by some as an indicator of the strength of the local economy, the county collected $958,300.89 in August. This figure is up 26.3 percent compared to 2019 and up 12.1 percent compared to 2020. The August report is made up of tax receipts from some of May and most of June. So far this year, through the month of August, the county has collected about $1.2 million more than it did during the same period last year. Overall, sales tax collected through August is up about 20.1 percent.

During new business, the commissioners approved the following:

The commissioners tabled a $17,000 request from the Seneca County Sheriff’s Office. Kerschner said he would like to take a week to review the request before making a decision. So far this year, the county has approved $713,000 of additional funding on top of the sheriff’s office budget.