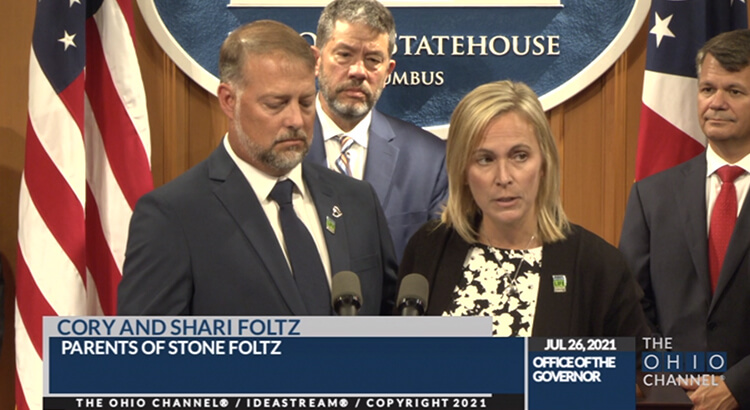 Cory and Shari Foltz, whose son Stone died in connection with a BGSU fraternity event, speak on needed reforms to college campuses with regard to hazing. Photo from the Ohio Channel
ShareTweet

Ohio’s public universities say they plan to keep students convicted of criminal hazing from being a part of any of their institutions.

That’s one part of what they say will be the next steps after a law expanding criminal penalties for hazing was passed by the legislature in June.

The law, and the pledges announced in a recent press conference at the Ohio Statehouse, were spurred on by the parents of Bowling Green State University student Stone Foltz and Ohio University student Collin Wiant, both of whom died in connection with fraternity-related events.

“You have heard us say before: Hazing is abuse, and hazing should not be tolerated in any form,” said Foltz’s mother, Shari. “We must also find ways to prevent this behavior from occurring in the first place, and create a new culture of what is acceptable when students decide to join new groups on campus.”

Members of the Inter-University Council of Ohio met at the Ohio Statehouse to unveil new “zero tolerance principles” meant to improve not only university oversight, but student awareness of the risks of hazing, both physical and disciplinary.

“Our universities exist to develop tomorrow’s civic leaders,” said Dr. Kristina Johnson, Ohio State University’s president. “We have a mandate to improve the lives of families in the communities we serve.”

The principles are were “designed to eliminate hazing through stiff penalties, robust collaborations, elevated oversight of our organizations and a comprehensive annual review,” according to IUC vice chair and Miami University president Greg Crawford.

Those penalties include the automatic dismissal and banning of a student convicted of criminal hazing from attending any public university in the state, he said.

The universities also pledged to work with law enforcement, strengthen the role of advisors at student organizations, educate families and alumni on hazing, improve anti-hazing content on college campuses, and provide more data and reporting mechanisms.

Stone Foltz’s father, Cory, praised the new measures, but implored the university leaders to ensure their students are able to live and learn safely.

“Stone would want us to be his voice, and never leave him behind,” Cory Foltz said. “We are counting on you to never leave any one of your students behind, so no other family will endure the pain of losing a loved one like we did.”