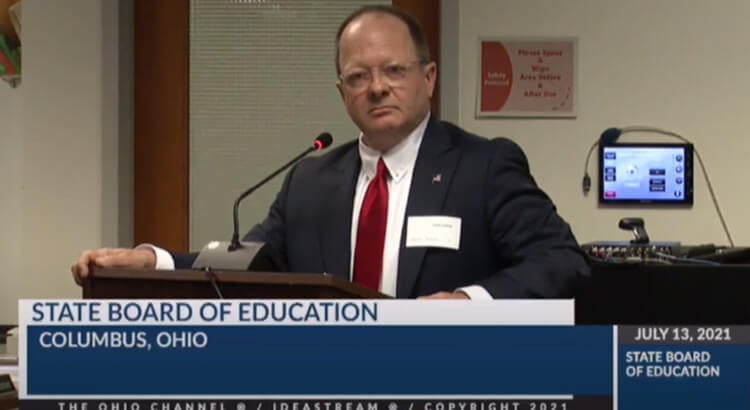 Mark Pukita speaks at the Ohio State Board of Education, decrying an anti-racism resolution passed nearly a year ago. Photo by The Ohio Channel
ShareTweet

In the weeks after the death of George Floyd spurred a nationwide movement against racism and police brutality, members of the Ohio Board of Education passed a resolution to acknowledge racial inequities and urge school officials to drive out racism in the education system.

The state school board is now pushing back against the resolution it once approved. The board now wants the state attorney general to decide whether the training and other anti-racism measures outlined in the resolution are legally binding.

“Even I could not have imagined the outrage of parents and community members over the training required by the resolution and the assertions made in it,” said member John Hagan, who put forward a resolution to ask for the legal opinion that was approved by 14-4 vote.

The reversal is part of a burgeoning controversy surrounding public education on the topics of race and American history. Hagan accused the anti-racism resolution as being connected to “critical race theory,” an academic term dealing with socioeconomic disparities that has been widely used and condemned by conservatives in recent months. He also accused it of being “1619-esque,” a reference to a Pulitzer Prize-winning series published by the New York Times examining the history of slavery in America.

Others on the state school board noted public support for the anti-racism resolution and pointed out it does not include any references to critical race theory or the 1619 Project.

“I am going to vote ‘no’ (on sending the resolution to the AG) because I believe in what the board voted on last July … and I want to support the people who have asked us not to do this,” board member Christina Collins said.

Collins said the issue has divided the board in 2021.

“I would love to see us stop rehashing the same conversations about something that was already passed so that we can move on and actually do something for kids in Ohio,” she said.

Attorney General Dave Yost has already expressed an opinion on the subject generally, in a joint letter with other state attorneys general to the U.S. Department Education.

There was pushback during this week’s meeting from some members of the public on the anti-racism resolution and the subsequent resolution seeking Yost’s opinion.

During the public participation portion of the board meeting, Mark Pukita called the anti-racism resolution “horribly drafted, inept on history, poorly vetted and repeatedly racist.”

Hagan said Pukita’s “guns a-blazing” approach was not the way to get his message across, despite their otherwise mutual agreement.

“Although I agree with a lot of what you had to say, I would suggest that you may want to refine your approach,” Hagan said. “And also realize that people that are on your side don’t need to be attacked.”

Pukita, a Republican who also said he is running for the U.S. Senate seat currently held by Rob Portman, left the board meeting to join a rally held at the Ohio Statehouse on the same topic. During that rally, he and other attendees claimed the board hampered their free speech. Those present blamed the media and “leftist socialist democrats” for creating controversy.

Conservative student activist Dakota R. Sawyer attended the rally and argued that his two biracial brothers have received the exact same grades and have performed well in school, thus proving no disparities between white students and students of color exist.

“If a white student and a minority student can get the same grade and honor levels, then it must be that there’s no disparity,” Sawyer said. “I’ve seen it first-hand. It’s absolute bullcrap.”

Sawyer, a high school student, said the group of people at the rally spent several weeks preparing to give public testimony before the state school board and had submitted their testimonies to the board by Sunday afternoon. They were told the testimonies would be submitted into the public record.

“Well, that’s a bunch of crap, because no one’s ever going to read it,” Sawyer said. “I was lucky enough to have a board member read it out loud at the meeting.”

The policy on written testimonies came up in a separate resolution included in the board materials for this week’s meeting, but was not voted on or discussed. The resolution to “remove the limitation on verbal public participation” called for a change in board policies and procedures which allows the president to impose public participation limitations, including a time limit of five minutes per speaker.

The resolution, which was formulated by board members Kirsten Hill and Dr. Jenny Shafer Kilgore, claims board President Laura Kohler is limiting public comment on “the topics of ‘critical race theory’ and the ‘1619 Project’ to written submissions only.”

Hill and Kilgore supported state legislation that would prohibit race as an educational element of teaching history. A former member of the board also testified for the bill at the same hearing, and yet another former board member, now-state Rep. Sarah Fowler Arthur, R-Ashtabula, is a co-sponsor of the bill.

In other business at the July board meeting, Dr. John Richard was approved to serve as interim superintendent of public instruction starting at the end of September, when current Supt. Paolo DeMaria plans to retire.