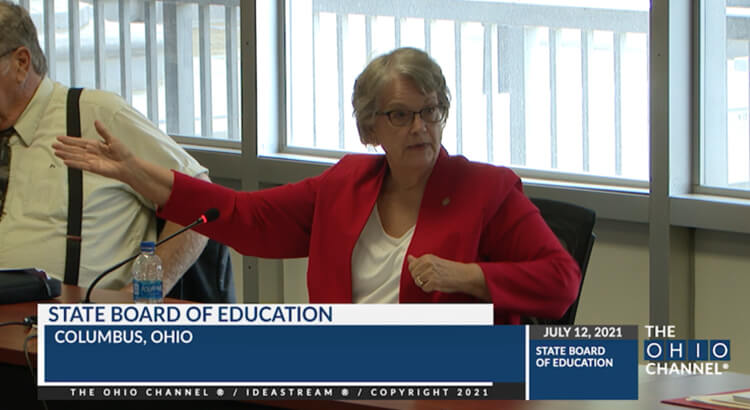 During a recent state school board discussion of student vaccinations, a board member offered a question to the Ohio superintendent of public instruction.

“I’m just wondering what kind of influence Bill Gates does have on you … “Are you paid by Bill Gates?” board member Diana Fessler asked Supt. Paolo DeMaria.

The comments came during the board’s July meeting on Monday, as members asked DeMaria about COVID-19 vaccination in schools. Other questions during the discussion regarded age limits on vaccines themselves — the Pfizer vaccination has been approved for children as young as age 12 — and whether or not the vaccines are mandatory for school children.

(Gov. Mike DeWine has since signed a bill into law that would temporarily ban K-12 schools and colleges in Ohio from issuing such COVID-19 mandates.)

Ohio has never had a mandate for residents to receive vaccines, but has implemented efforts like the Vax-a-Million drawing to incentivize vaccination.

“I think our role is, on the one hand, we want to facilitate those who want to get the vaccine to get them, and I think that’s been the role that we’ve been playing with school districts,” DeMaria told the board, adding that the Ohio Department of Education is “deliberate” in following state laws on religious and conscience exemptions.

Fessler then jumped in, citing DeMaria’s resume, which she said he provided to her when she joined the board. The resume includes more than five years as a principal consultant at Education First Consulting. The firm targets grant funding and policy advising to public education throughout the country.

The Bill & Melinda Gates Foundation is listed as a client on Education First’s website. A description of the work the consultants do with the foundation includes targeting grants to preschool through college institutions and serving “as an intermediary for this network of grantee communities.”

Seen at the Ohio State Board of Education’s July meeting. While discussing vaccinations in schools, board member Diana Fessler asks if the state superintendent is paid by Bill Gates. pic.twitter.com/MwhIKk92pH

Fessler said she researched not only his previous jobs, but his references, one of whom she claimed was connected to Gates in a Google search she conducted.

Conservative groups and politicians have spotlighted Gates in anti-vaccination efforts, falsely claiming at times that he has control over the virus, and at other times falsely claiming he has created coronavirus, as one Ohio legislator did.

An OCJ investigation showed that legislative leaders and Ohio Gov. Mike DeWine also met with Robert Kennedy, Jr., who has led anti-vaccination politics through debunked claims and false accusations about Gates’ plan to control vaccine-recipients through the vaccine.

When board president Laura Kohler questioned the relevance of the inquiry, Fessler said, “Because it’s on vaccines, that’s why I’m bringing it up, it’s the vaccine question.”

She also previously served on the board in 1994 and 1998, and was a state representative from 2001 to 2008, once serving as vice chair of the House Education Committee.