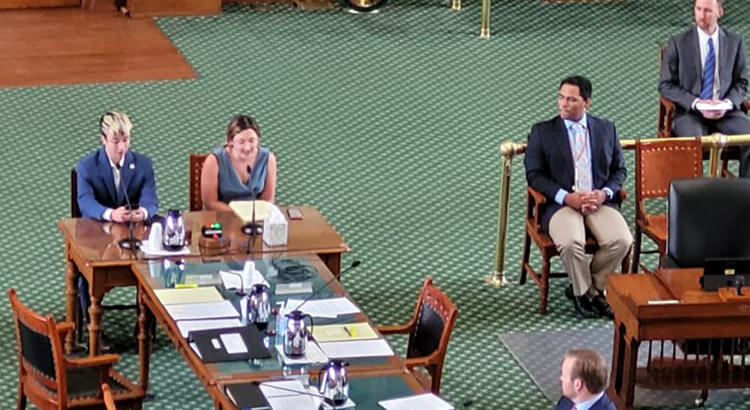 After a series of bitter all-night hearings over the hottest political issues, the bustle of a heated special session had been replaced within 24 hours by small groups of tourists ambling through the pink granite building which, in true Texas fashion, stands 15 feet taller than the U.S. Capitol in Washington, D.C.

But inside the Senate chamber, a desultory committee hearing still featured the hot-buttons that have roiled the Lone Star State for months.

It’s a chaotic political situation into which Ohio Gov. Mike DeWine and six other Republican governors are sending state troopers at the request of Texas Gov. Greg Abbott, also a Republican. Many states — including Ohio — also have members of the National Guard deployed at the Texas-Mexico border, but they’re there at the behest of the federal government.

In Texas and elsewhere, critics of the trooper deployments are calling them political theater by a Texas governor and a national party eager to change the subject from deadly winter power failures, former President Donald Trump’s coronavirus response and the insurrection that he encouraged on Jan. 6.

“They want to change the subject,” said Brandon J. Rottinghaus, a political science professor for the University of Houston.

In Texas, the Legislature meets in regular session for just 140 days every other year. The only other time it meets as an official body is when the governor calls a 30-day special session.

In recent times, such sessions have become “weaponized” into yet another feature of today’s political polarization, Rottinghaus said.

And so, in Monday’s Senate committee hearing, witnesses were testifying against a bill that would limit Texas transgender athletes’ participation in school sports.

Meanwhile, Abbott was threatening Texas House Democrats with arrest after scores fled the state to deny Republicans the quorum they need to pass further restrictions on what are widely believed to be among the most restrictive voting laws in the country.

The Democrats went to Washington, D.C., where they pressed members of Congress to pass federal legislation protecting voting rights. They said the Texas measures, like many others pushed by Republican-controlled legislatures, merely build on Trump’s falsehoods about a stolen election to pass laws that make it harder for minority groups to vote.

“We need Congress to act now to pass the For the People Act and the John Lewis Voting Rights Act to protect Texans — and all Americans — from the Trump Republicans’ nationwide war on democracy,” Chris Turner, chairman of the House Democratic Caucus, told the Washington Post.

The push by Republicans to send state troopers to the border isn’t new.

Abbott, who became governor in 2015, claimed “carnage” was being caused by people coming across the southern border without documents. That earned him a “false” rating from PolitiFact.

It’s easy to see why, said Charis E. Kubrin, a professor of criminology, law and society at the University of California, Irvine.

There has never been evidence showing that immigrants commit more crime than the native-born population. Now there’s evidence that undocumented immigrants are much less likely to commit serious crimes than their native-born counterparts — in Texas.

“This narrative that we need to get tough on the border, that they’re coming in and raping our women and doing these crimes, that is completely false,” Kubrin said Wednesday. “That is undisputed.”

She cautioned that just because it’s a myth that undocumented immigrants commit crimes at greater rates than the rest of us is no reason to ignore the border altogether. But Kubrin said it’s bad public policy to dress up a periodic refugee crisis as an ongoing crime wave.

Indeed, a 2015 El Paso Times analysis showed that as Texas state troopers surged to the border, the number of traffic tickets issued elsewhere in the state went down and wrecks went up. Meanwhile, residents in overwhelmingly Hispanic border communities complained of constantly being pulled over and ticketed.

So why would the Texas governor persist with a policy that in the past has caused harm in an attempt to address a problem that he can’t show exists? And why would DeWine and other Republican governors send their own troopers in support?

In a word, “politics,” said the University of Houston’s Rottinghaus.

As Texas Monthly reported Tuesday, Abbott faces three primary challengers from his right who charge that he’s “feckless and weak.” That’s at least partly due to power failures last winter in energy-rich Texas in which people literally froze to death.

It’s probably not an accident that the agenda Abbott set for the summer special session is full of hot-button issues such as critical race theory, but silent on the power failures that have periodically plagued the state since it deregulated its power grid two decades ago.

For his part, DeWine faces a challenger from his right after he pushed mask wearing and ordered shutdowns in response to the coronavirus pandemic. Also members of his administration were involved in what federal prosecutors last summer said was likely the biggest bribery and money laundering scheme in Ohio history.

Rottinghaus said the governors’ attempted solution to their political woes is changing the subject to the federal government’s supposed failure to secure the border. After all, blaming the feds is a timeworn tradition.

“It’s a diversionary tactic and it’s one that will always be there,” Rottinghaus said.