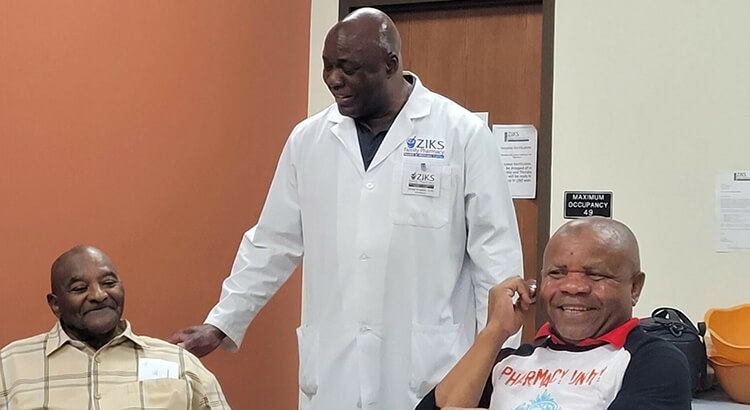 Dallas Shackleford Jr., left, Gregory Braylock Sr., and Nnodum Iheme Wednesday at Iheme’s business, Ziks Family Pharmacy. Braylock and other Ziks pharmacists have been treating Shackleford under a pilot program that allows them to be paid for such care. Photo by Marty Schladen, Ohio Capital Journal.
ShareTweet

Dayton, Ohio — Ziks Family Pharmacy in the historic Wright-Dunbar neighborhood here has been participating in a program that it and Dayton-based CareSource hope will serve as a national model. Now some results are in.

CareSource, a Medicaid managed-care provider, for a year has been paying Ziks not just to fill prescriptions, but to do diagnostic tests and help patients manage chronic conditions such as diabetes, asthma, blood pressure and smoking cessation.

The Ohio Department of Medicaid pays CareSource a set amount each month for each client it serves, so it makes sense for the company to try to keep them healthy as possible and this keep medical expenses down. But until the Ohio General Assembly in 2019 passed a law giving pharmacists “provider status,” there was no way to pay the medical professionals to do anything other than to dispense drugs.

The resulting system has been particularly difficult for community pharmacies in urban centers and rural areas — places where people often are least likely to have easy access to health professionals.

“We had 10,000 community pharmacies close in a decade. Two hundred right here in Ohio,” said Scott Knoer, CEO of the American Pharmacists Association and former chief pharmacy officer for the Cleveland Clinic. “The fundamental payment mechanism is broken and the incentives are misaligned.”

Conferring health-provider status on pharmacies is meant to change that mechanism and produce healthier communities.

“Through partners like CareSource, we’re paying pharmacists to do the right thing, to help our patients, to do what we went to school for,” Knoer said. “That’s fantastic.”

As other Ohio Medicaid managed-care organizations start their own pharmacy-provider programs, CareSource reported six-month results from its partnership with Ziks and Camden pharmacies. The sample sizes were small, but the results appear promising.

Some patients say their lives improved as a result. For example, Dallas Shackleford Jr., 84, said participating in the program has helped him to feel much better.

“I didn’t know how to regulate my blood sugar,” the former bodybuilding champion said.

But where his Medicaid plan limited his routine doctor visits to once every three months, an emotional Shaclkleford said he gets calls from Ziks pharmacists three or four times a week. They’ve gotten him to give up bread, sweets and sugary drinks.

His weight is down by more than 20 pounds and his blood sugar is down substantially. “It’s a blessing for me.”

Ziks owner Nnodum Iheme said that pharmacists need to be able to take time to help patients like Shackleford. Getting paid to be providers allows them to do that.

“For them to open up to you about what is really going on in their lives really takes time and trust and relationships for them to do that,” he said. “That’s when passion really comes into play.”

Ziks also has used the program to be a big player in getting vaccinations out to Dayton’s minority communities. Iheme described how he and others organized an event — complete with food and a bounce house — at a public housing development after hearing complaints that it was hard to get from there to the health department for shots.

Now CareSource wants to scale the program up to be used in 200 Ohio pharmacies and in other states where it operates such as Georgia, Kentucky, Indiana, Arkansas and West Virginia, said Stephen Ringel, CareSource’s Ohio market president.

He likened pharmacies serving as health-care providers to the “last-mile” concept in supply chain management. In this case, because many community pharmacies already deliver drugs and medical devices, they can literally go the last mile delivering certain health services to patients who often might face transportation challenges, he said.

Knoer, of the American Pharmacists Association, says his group is working to pass a federal law allowing medical provider status to pharmacies.

But while enthusiasm for the program is high among pharmacists, Ringel said they need to fundamentally rethink how they do things to make it work.

Gregory Braylock Sr., one of the pharmacists treating Shackleford, is all in.

“This is the potential of pharmacy,” he said. “This is our future.”