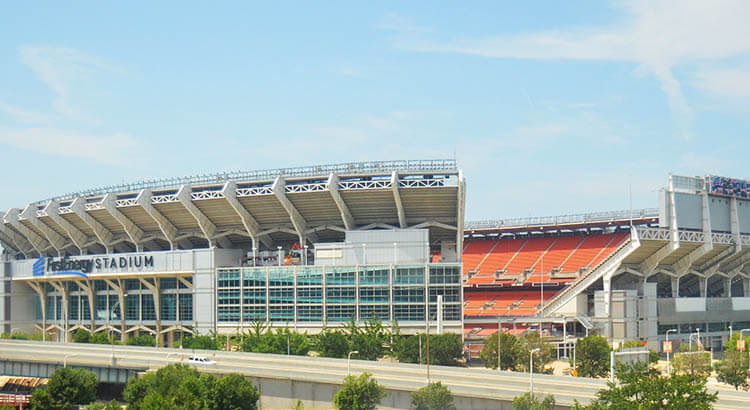 An exterior view of FirstEnergy Stadium in Cleveland, Ohio. (Photo by Erik Drost and licensed under Creative Commons BY 2.0)
ShareTweet

Ohioans will have to hold off from planning their next Buckeyes-Bengals-Browns parlay, but perhaps for not too much longer.

Ohio lawmakers did not finalize a proposal on legal sports gambling before departing the Statehouse for a summer break. But it’s a sure bet they will take a close look at the issue upon returning to work in September.

“Sports betting is a big priority,” Ohio House Speaker Bob Cupp said in late June as his chamber wrapped up its final pre-break session. “We would like to get that done.”

The Ohio Senate took the lead on the sports betting issue, with lawmakers meeting a number of times to hear from industry professionals before introducing a proposal in May.

The resulting Senate Bill 176 took many changes prior to its passage in June, sending it to the House. Hopes of the legislation moving quickly through the House before the summer break were perhaps too ambitious.

Cupp has said that with budget talks dominating the June schedule, members needed more time to study a plan that Statehouse researchers say will lead to billions of dollars wagered each year once it is in place.

Still to be determined is the central question to any potential sports betting program: Where should Ohioans be able to place a bet?

Lawmakers must decide how many sportsbooks will be available and which entities are eligible to receive them.

It is seen as a given there will be mobile sportsbooks, which will handle the vast majority of Ohio bets.

From there, the decisions regarding retail sportsbooks will have big-money implications for whichever businesses get a chance to land them. Casinos want in, as do professional sports teams, bars, restaurants, entertainment centers (such as bowling alleys) and gas stations.

The Senate proposal allows sports franchises to have first-dibs in placing retail sportsbooks inside their arenas. In prioritizing sports teams, casinos in certain major cities may find themselves excluded from the program. This may be a tough sell for House members, particularly those representing cities like Columbus, Cincinnati, Cleveland and Toledo where some of the casinos are located.

Cupp said legislative leaders will try to hash out details over the summer, then return to the Statehouse with a suitable program to be finalized in the fall.

There is one element of the initial proposals they will not have to worry about — electronic bingo. For much of 2021, lawmakers have packaged e-bingo with sports betting in an effort to modernize the charitable gaming offerings at veteran’s and fraternal halls. (This work has been to the chagrin of casino interests, which fear the machines will too closely resemble their own slot machines.)

The Ohio General Assembly wound up including e-bingo within the state budget recently signed into law by Gov. Mike DeWine. The budget provision allows these existing charitable organizations to install up to 10 e-bingo machines. This will allow lawmakers to stick to just the sports betting issue this fall.

“That’s our goal, that’s our hope, that’s what we’re going to work toward,” Cupp said.