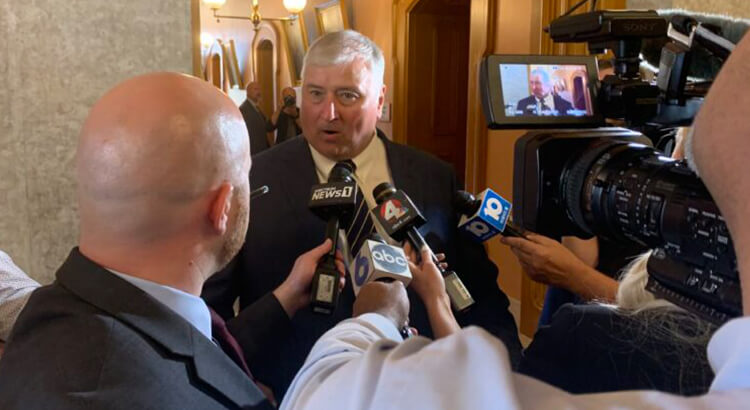 Larry Householder addresses reporters June 16 after lawmakers voted to expel him from the General Assembly. Photo by Jake Zuckerman.
ShareTweet

A trade association connected to bar machine operators paid $100,000 to a political nonprofit that pleaded guilty to its role in an alleged bribery operation engineered by the former Speaker of the Ohio House, tax records show.

The 2019 payment came from the Fair Gaming Coalition of Ohio (FGCO), which has deep ties to the Ohio Coin Machine Association. The coin machine association represents vendors and servicers of bar entertainment like arcade games, pool tables and jukeboxes.

The money went into Generation Now, a nonprofit that federal prosecutors say then-Speaker Larry Householder, R-Glenford, controlled when it received $61 million from FirstEnergy Corp. and spent it securing the passage of a ratepayer-funded bailout of nuclear plants owned by the company’s subsidiary.

Generation Now — a 501(c)(4) nonprofit, technically known as a “social welfare” organization that’s not required to disclose its donors, but more commonly referred to as “dark money” — was used “as a mechanism to receive undisclosed donations to benefit Householder,” according to a statement of facts it agreed to in a guilty plea. The nonprofit agreed to forfeit its assets to the government, including nearly $1.5 million from its accounts.

“It’s a secret, a (c)(4) is secret,” Clark said in a recorded call, according to government prosecutors. “Nobody knows the money goes to the Speaker’s account. It is controlled by his people, one of his people, and it’s not recorded.”

Among other clients, Clark worked as a lobbyist for the FGCO dating back to 2013, lobbying records show. In 2019, he registered to lobby for the coalition on the state budget and two sports betting bills navigating the legislature at the time.

Tax documents from 2019 show the coalition made a $100,000 cash contribution to Generation Now at an address linked to Householder. Such disclosures do not provide specific dates of contributions.

One of FGCO’s lobbyists, David Corey, declined to comment on the record.

The coalition shares an address with the Ohio Coin Machine Association (OCMA). Its 11 board members all serve on the OCMA board as well. Several board members work in or own companies that rent out and service coin operated bar machines.

The coalition is currently lobbying to reshape a sports betting bill that passed the Senate earlier this year. FGCO members have urged lawmakers to allow Ohioans to place bets at Keno machines, commonplace in bars, bowling alleys and retail locations around the state. They want the bill expanded to allow betting at Keno machines in retail locations (grocery and convenience stores), which is not allowed under the current bill. This, they said, will tip the scales away from large cities that have casinos and large sports arenas and toward less populous counties that lack such facilities.

The government built its case around Generation Now as a vehicle for accepting $61 million in FirstEnergy funds. The company recently acknowledged making the payments in a civil lawsuit related to the scandal.

However, several parties that include interests unrelated to the energy industry also contributed to the account.

Media reports, using tax disclosures, have identified payments into Generation Now from other sources including at least $700,000 from a nonprofit solely funded by American Electric Power (also a major beneficiary of the bill cited by prosecutors); $135,000 from a trade association representing nursing homes; $25,000 from a payday lending company (according to prosecutors); and $840,000 from multiple unions.

Clark, who died by suicide earlier this year, was a registered lobbyist for at least two payees into Generation Now: the FGCO and the Ohio Health Care Association (nursing homes).

He did not register as a lobbyist for any alleged work for FirstEnergy.

He also represented several different payday lenders, although court documents to not specify which company within the industry contributed to Generation Now, obscuring any possible link.

Before his death, told Cleveland.com he believes the government’s case against him was built in part upon secret recordings from 2019 made by other clients who hired him to help influence pending sports betting legislation. He said he now believes the purported clients were FBI agents.

His lawyer, who also represents Generation Now in the criminal proceedings, did not respond to an inquiry.

Two Householder attorneys did not respond to an email.

A spokeswoman for the U.S. Attorney of the Southern District of Ohio said she would look into the matter but did not respond before publication.