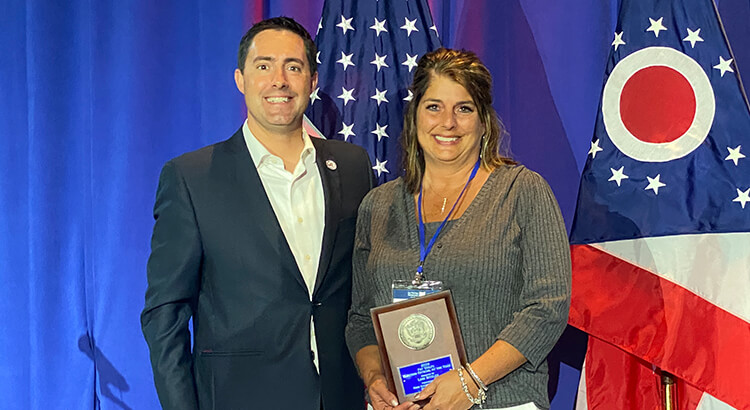 Ritzler began working in her current position in February of 2016, after serving as a member of Tiffin City Council for 15 years.

Ritzler, a U.S. Army veteran who was one of 24 people nominated for the award, said she was honored to be recognized with this award.

“It’s really humbling that the board thinks enough of the work that we do to nominate me for this, and it’s humbling that the Secretary of State’s Office would choose me,” she said. “Anything with Pat Wolfe’s name on it is truly an honor.”

Ritzler said the recognition is a team win for the board, the staff and the entire county.

“We couldn’t do what we do without all of them,” she said.

Ritzler manages the day-to-day operations at the board of elections, working directly with staff, maintaining payroll and leading a highly effective team.

Board of Elections member Jim Cline said that in his time on the board so far, he has found Ritlzer to be “highly knowledgeable, extremely organized and very fair.”

He said he believes Ritzler to be a worthy recipient of the award.

“Lori is a fair person and it is a pleasure working with her,” Cline said, adding that her bipartisan attitude serves her well in her position.

Seneca County Commissioner Mike Kerschner thanked the leadership at the board of elections, noting that Elections Director Jim Ehrman was also the 2017 Ohio Republican Election Official of the year.

“It’s incredible to see leaders from Seneca County getting statewide recognition not just once, but twice in the past four years,” he said. “We work closely with the board of elections, so we know they are doing a great job, but it’s encouraging to see all of the hard work rewarded by the Secretary of State’s office.”

Board of Elections Chair Jim Fruth echoed Kerschner’s thoughts and said the county is fortunate to have the directors it does.

“Seneca County should be very proud to have Lori join Jim Ehrman as an Ohio Director of the Year,” Fruth said. “Few counties are able to match our achievement. Lori richly deserves the honor. She has worked well with state and local officials and she excels at serving the public with innovations now being used throughout the state. We are truly blessed.”

In a letter signed by each of the county commissioners and by the entire elections panel, the group wrote that Ritzler has “served her country, her county and her city with energy and resolve.” The letter states that the quality of her work, especially directly with members of the public, makes her deserving of the award. Her work with the county’s communications staff to be as transparent and as accessible as possible, her guidance to comply with several state directives and her commitment to professional development are all reasons noted in the letter why she is deserving of the accolade.

“Lori has consistently demonstrated her commitment to the integrity of our free, fair and well-audited elections,” Ehrman said. “We nominated her for this award because of her accomplishments, in addition to being a mother and an engaged and respected member of our community.”