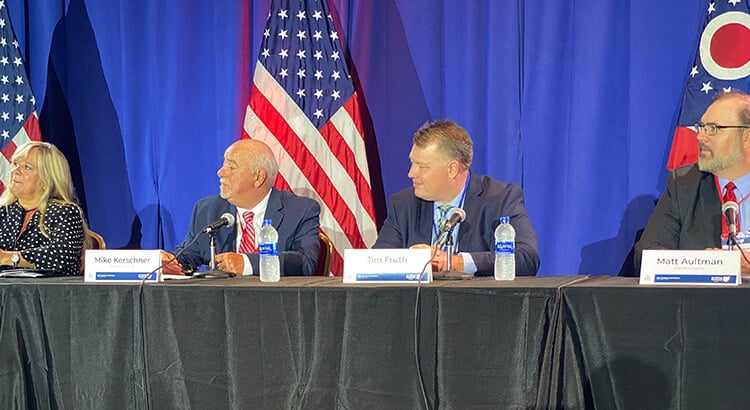 Tiffin, Ohio — Seneca County Commissioner Mike Kerschner and Seneca County Board of Elections Chair Jim Fruth served on a panel Tuesday afternoon during the Secretary of State’s Summer Conference in Columbus to discuss the highly effective working relationship between the two boards.

A spokesman for Ohio Secretary of State Frank LaRose’s office said that Seneca County was a great choice for the panel.

“The partnership between Seneca County’s commissioners and Board of Elections serves as a model for how two essential organizations can work together to the betterment of voters,” the spokesman said.

Fruth said the relationship has improved greatly in the past five years.

“About five years ago, I don’t think we would have been asked to serve on this panel,” he said before attributing the positive changes to communication, goal-sharing, public service and transparency. “I have complete trust in our respective offices.”

“We really have come a long way,” he said. “The degree of trust between the commissioners and the board of elections has grown immensely. We are at the point where we look favorably upon any requests they make because we know they have been well thought-out and in the best interest of the electorate.”

Fruth said the improved relationship has led to respect and recognition from the Secretary of State’s office.

“I could not be prouder of our directors, staff and board, and now we have cultivated those relationships with Columbus. (The late) Mike Bridinger had a lot to do with it, but everyone has done their share,” he said.

Topics discussed on the panel included what commissioners learned from working closely with election administrators, how the communication flows between the two boards and what the budgetary process is like.

Kerschner said he learned just how much work goes into an election and how bipartisan the process is. He and Fruth discussed how the trust has grown between the two boards because of solid communication and advanced notice of upcoming financial needs.

Kerschner also discussed collaborative projects between the two boards, including efforts to lead the state in transparency and accessibility. This has been done in many ways including with the online live stream of the unofficial and official canvass results and communication work to recruit poll workers. Election stream videos were viewed more than 16,000 times.