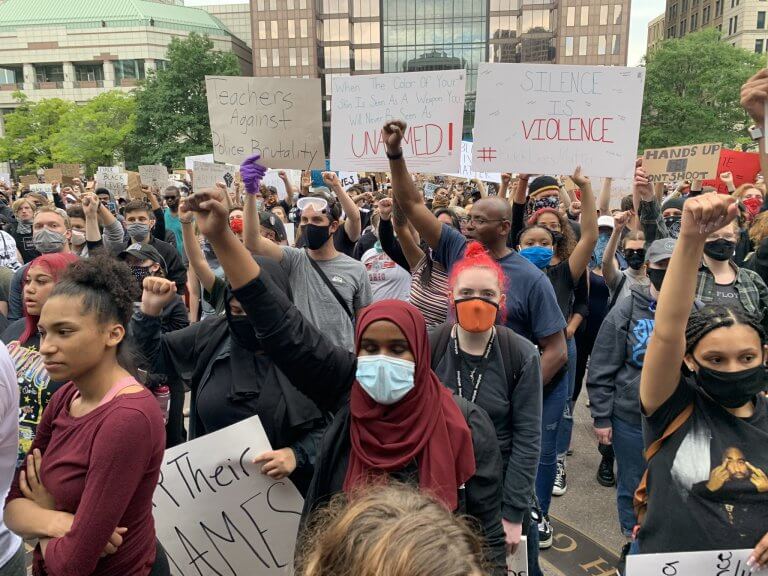 Protests form days after the murder of George Floyd in 2020 at the Ohio Statehouse. Photo by Jake Zuckerman.
ShareTweet

The Ohio Senate unanimously passed legislation Wednesday that would increase penalties on protesters and others for alleged offenses against police.

Senate Bill 16 would create a new criminal offense: “unlawfully impeding public passage of an Emergency Service Responder (ESR).” It prohibits people from “recklessly obstructing” a highway, street, or sidewalk in such a manner as to make passage “impassable without unreasonable inconvenience or hazard.”

The first-degree misdemeanor charge would only apply if the obstruction prevents ESRs (law enforcement, EMS, firefighter, etc.) from accessing or leaving an emergency scene and people refuse to “cease the obstruction” upon command.

A conviction could result in up to 180 days in prison and or a fine of up to $1,000. The bill also beefs up several penalties related to assaulting or “menacing” ESRs.

The original version of the legislation contained several provisions sparking alarm from the ACLU as it relates to citizens’ rights to free speech and peaceful protest. The stripped-down bill that passed Wednesday was 18 pages, compared to the 53-page original.

On the Senate floor Wednesday, lead sponsor Sen. Tim Schaffer, R-Lancaster, said the bill amounted to a compromise after heeding the ACLU’s concerns. He said the final product satisfies the original goal of protecting police officers.

Earlier versions of the bill contained several provisions more explicitly aimed at protests: it created a new charge for “causing serious physical harm” to buildings; another for “knowingly harassing or intimidating another person;” and a set of other charges related to people who participate in a “riot,” a loosely defined term in Ohio law.

Sen. Cecil Thomas, D-Cincinnati, also said pieces of the bill concerning peaceful protests, at the ACLU’s behest, were removed. He said the bill is redundant, outlawing acts that are already illegal.

Gary Daniels, an ACLU lobbyist, said he doesn’t like the bill, but it’s not worth the fight unless it significantly changes shape in the future.

“For us, the provisions removed turned it from a high-priority oppose bill to one of any number of other bills we still oppose for general mass incarceration/the bill is unnecessary reasons,” he said in a text message.

The bill, as passed, adds new penalties for “menacing” if a person tries to put an ESR or their family in “fear of physical harm or death” by displaying a deadly weapon.

A fiscal note attached to the bill, drafted by the nonpartisan Legislative Service Commission, notes the bill is unlikely to bear a significant price tag because some of its underlying conduct can already be charged under existing law. However, it notes a caveat.

“The exception to this would be if the state were to experience an increase in riots, such as the ones experienced in the summer of 2020, in which case the bill may result in a significant number of new cases and charges, thereby having a greater impact on county and municipal justice systems,” the fiscal note states. “Assuming such occurrences are relatively rare, the bill is unlikely to have a discernible impact on any given criminal justice system on an ongoing basis.”

However, he said it’s the impeding public passage that gets to the heart of the more “widespread dangers” created during some of the post-George Floyd eruptions of protest, unrest, and sometimes, violence.

“Impeding public passage is not just an inconvenience for those who might simply have to find a different route. It can prevent police from responding to violence, EMS from responding to medical emergencies and from making it to the hospital, fire departments from responding to burning buildings, and can place those who may simply be stuck in traffic in grave danger,” he said in written committee testimony.

On the other side, Niki Clum, a lobbyist with the Office of the Ohio Public Defender, said she still has issues with the bill, although many of its worst pieces were amended out.

She said much of the legislation creates new penalties for behaviors that are already illegal. And the impeding passage provision, she said, is overly broad and already illegal.

“This language allows ESRs to artificially or arbitrarily create a condition where an emergency vehicle needs to go through a protest,” she said in written testimony. “If individuals do not move or do not move quickly enough, they will all be charged with a misdemeanor of the first degree. Clearly, this would have a negative impact on the First Amendment right of citizens to assemble.”

The bill goes to the Ohio House for consideration, where several Republicans have proposed legislation more similar to the original version of SB 52. For instance, House Bill 109 jacks up penalties for crimes that occur at “riots” and targets people who provide “material support” to those who participate in one. It has not yet been put up for a vote.