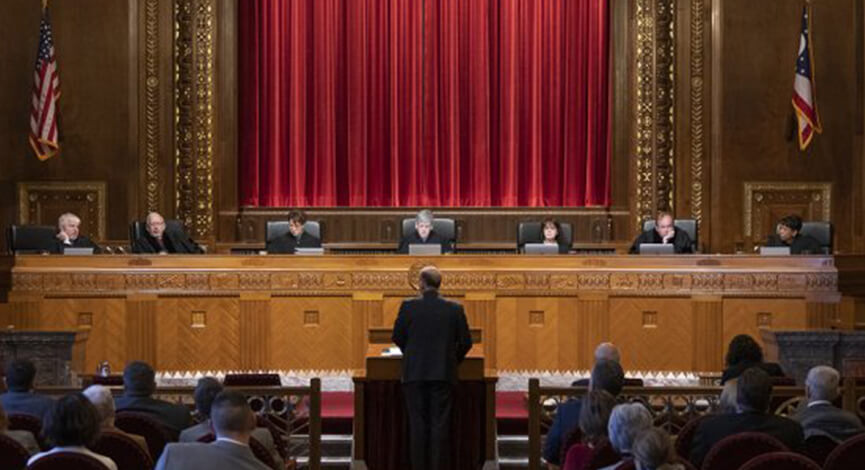 School districts do not have the discretion to authorize the arming of teachers, according to a Wednesday ruling by the Ohio Supreme Court.

The state’s highest court came out with the decision on Wednesday, going against legislative efforts and pro-gun lobbying groups who believed local control should be a part of firearms policies in Ohio schools.

The court heard arguments on the case back in January.

The Madison Local School district passed a resolution in April 2018 granting written authorization by the school board to those deemed appropriate by the district superintendent to enter school property armed. After that resolution passed, a group of parents and gun-control advocates, led by parent Erin Gabbard, sued the school to stop the resolution from being implemented.

The policy allowed up to ten employees to carry concealed firearms, under state concealed carry licensing, and with at least 24 hours of “response-to-active-shooter training.” The policy also required armed employees to have handgun qualification, pass a criminal background check and mental health exam, along with receiving “training regarding mental preparation to respond to active killers.”

The Supreme Court upheld a 12th District Court of Appeals decision by a divided court, in which it said the school district’s resolution violated Ohio law by allowing school employees to carry a deadly weapon “without the statutorily required training or experience.”

The high court spent time dissecting the language of the law, particularly the definition of a person authorized to enter school grounds while armed. That language included special police officers, security guards, and any “other position in which such employee goes armed while on duty.”

“That an employee might have been hired to teach, to coach, or to perform other primarily non-security functions does not alter the fact that an employee who carries a weapon while performing his or her job ‘goes armed while on duty,’” O’Connor wrote in the lead opinion.

The court ruled that because the Ohio law in question includes special police officers and security guards along with other positions which require being armed, those “other positions” can be interpreted to have similar law enforcement duties.

“A person might be hired as a teacher, but when that person agrees to go armed while teaching, his or her duties expand to encompass additional duties akin to those normally performed by special police officers and security guards,” the ruling stated.

The court also said that Ohio law does not allow for school boards to authorize their employees to go armed “so long as the employees undergo whatever training a board might deem advisable.”

“A board of education’s written authorization for a person to carry a concealed weapon in a school safety zone does not excuse the person from criminal liability if the person lacks a valid license to carry such a weapon,” the majority ruled.

In one of three dissenting opinions, Justice Sharon Kennedy argued that “plain language” in Ohio Revised Code “negates criminal liability for a person carrying a firearm on school grounds when that person is authorized by the school board to do so,” and disagreed with the majority on the role of an armed teacher.

Kennedy said the court’s analysis should have been based on an exception to the criminal law against carrying a firearm in a school safety zone for law enforcement, security officers or “any other person who has written authorization from the board of education.”

“Because the statute permits the school board to grant written authorization to any person to carry a firearm on school grounds without imposing any limitation on the school board’s discretion to do so, the analysis should stop there,” Kennedy wrote.

Kennedy also disagreed with the interpretation of the court on the type of training required to be armed in school depending on the particular position for which a school employee was hired. Just because a school board gives authorization for a teacher to have a gun does not change their position if they are armed, Kennedy argued.

“Had the General Assembly intended to condition the authority to carry a firearm in a school safety zone on having the basic police training required of peace officers, it could have written the statute that way,” Kennedy wrote.

Justice Patrick Fischer agreed that it was the responsibility of the General Assembly, not the courts, to determine “weigh policy concerns and make legislative choices for the benefit of all Ohioans.”

“If the General Assembly had wished to prohibit nonsecurity personnel, like teachers, from carrying weapons while on school property without the required training, it could have done so and may still do so,” Fischer wrote in a separate dissenting opinion. “This court does not have the authority to make that requirement.”

The author of a re-introduced bill to give local control to school districts on firearm policies said the ruling “only underscores the critical and urgent need to get House Bill 99 signed into law.”

“The Ohio General Assembly has a responsibility to give our school districts the option to protect their students and staff by embracing local control and establishing appropriate baseline training requirements for educators to carry a firearm,” state Rep. Thomas Hall, R-Madison Twp., wrote in a statement.

The bill had its last hearing on April 15 in the House Criminal Justice Committee.

As the name at the front of the lawsuit, Gabbard said the ruling came as a relief to her and parents like her.

“Once this ruling is implemented, parents will at least know that the teachers who carry firearms in our schools are properly trained, as required by state law,” Gabbard said in a joint statement with pro-gun control group Everytown for Gun Safety.