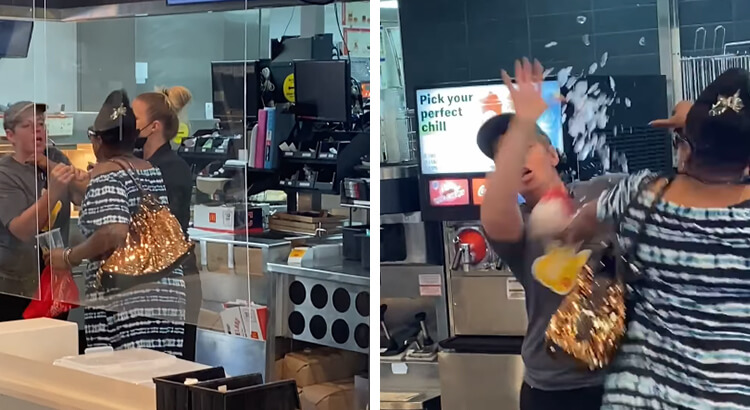 Ravenna, Ohio — An Ohio woman was arrested Monday morning after assaulting employees at a Ravenna McDonald’s restaurant when they refused to mix three slushie flavors together for her.

Around 9:40 a.m., Ravenna police were called to the McDonald’s on the report that employees were being assaulted by a customer.

“I heard her ask for a slushie with all three flavors mixed into one,” witness Brian Allen told Cleveland-area news outlet WOIO. “Whereupon the manager informed her that they could not do that, and she became increasingly irritated and combative and decided that she would go behind the counter and fix her own drink.”

Allen said that’s when he decided to record the incident on his cellphone (see below).

“I was concerned that she may start hurting somebody. So, I started recording in case law enforcement needed the tape for any kind of evidence of the assault,” he told the outlet.

The bizarre video of the incident shows Cleveland forcing her way behind the counter with an empty cup in her hand. The restaurant manager is seen attempting to intervene.

Cleveland then went back into the customer area after fighting with the employees, filled her cup with some ice from the soda machine, and went back behind the counter. The cup of ice was thrown and Cleveland is seen punching one of the employees in the eye.

After being punched in the eye, the employee wrestles Cleveland to the ground and begins punching her in the face.

A police officer eventually arrives and is seen placing Cleveland in handcuffs before escorting her out of the restaurant.

Cleveland pleaded not guilty at a court hearing Tuesday, and her bond was set at $1,000.