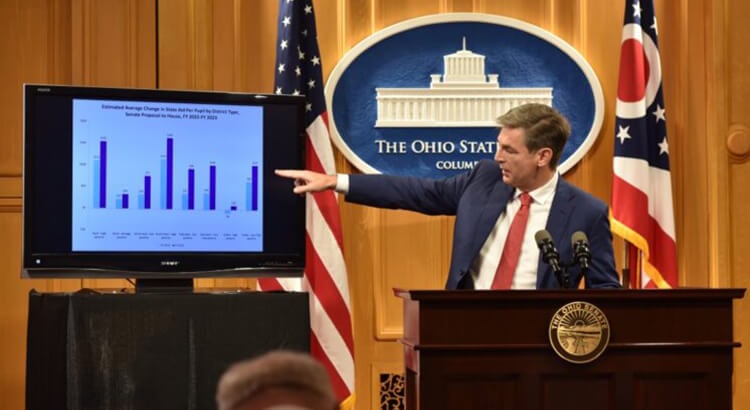 The two legislative chambers have approved their respective versions of the two-year state operating budget.

Lawmakers in the Ohio Senate and Ohio House of Representatives have until the end of June to find common ground among their differing spending priorities. The goal is to send a finished version to Gov. Mike DeWine’s desk by June 30, just in time for the new fiscal year to start on July 1.

The Senate passed its version on Wednesday afternoon by a party line vote of 25-8. The House version passed in April. There have been months of testimony from a slew of public advocates and state agency directors who pitched lawmakers on the need for funding their varying priorities.

There remain some major issues to be hashed out in a Conference Committee of Senate and House leaders. Among them is determining a suitable public education funding model, a subject that has bedeviled lawmakers (or been ignored entirely) since the Ohio Supreme Court ruled decades ago the current system is unequitable and unconstitutional.

In short, the House is proposing more funding per student than the Senate and the latter wants a bigger increase to private school voucher funds. Senate Republicans view their school funding plan as more financially sustainable for the long term.

Members will also negotiate a proposed income tax cut; the House wanted a 2% cut and the Senate version features a 5% cut. Either way, research shows the bulk of this financial impact would benefit the highest earners in Ohio.

The Senate’s larger income tax cut would cost an estimated $874 million in state revenue, paid for in part by senators removing a large chunk of funding from the House budget to pay for broadband internet expansion.

Aside from the budget bill, lawmakers recently created a grant program to use public dollars to spur private infrastructure projects — with a goal of bringing high-speed internet to the 1 million Ohioans lacking access at home. House members allocated $190 million toward this program, but the Senate version removed this funding.

Senate Finance Chairman Matt Dolan, R-Chagrin Falls, said Wednesday the House sent over a budget with “good bones.” He noted there is agreement between the House, Senate and governor’s office on most items within the 3,300-page, $75 billion budget bill.

As the last chamber to act before Conference Committee negotiations, though, Dolan said the Senate has a prerogative to “put our stamp on what we feel where our priorities lie.”

That is, the Republicans in the supermajority do.

While nearly a dozen Democrats supported the budget bill in the House, none did in the Senate. Democratic members described there being some positive aspects of the budget plan and expressed hope of eventually supporting the final version, but did not wish to lend support at this point.

State Sen. Vernon Sykes, D-Akron, argued the budget “really fails to address historic opportunity that we have now to try to deal with, in a fair and equitable way and adequate way, the funding for education.” He criticized the income tax cut for “depriving” Ohio of resources that could otherwise be spent on other public services.

Democrats unsuccessfully tried to make a number of changes to the Senate budget bill. Among them was the attempted removal of a provision to require that party affiliations be included on judicial election ballots.

The Ohio Capital Journal has previously reported on a number of budget provisions considered by lawmakers, including a proposal to vacate public health order violations by Ohio businesses; a measure to raise taxes on low-income properties; the proposed removal of the Step Up to Quality child care standards system; and a provision that could lead to a number of municipal health departments being merged with their county departments.

Further reporting on key issues within the budget negotiations is forthcoming.