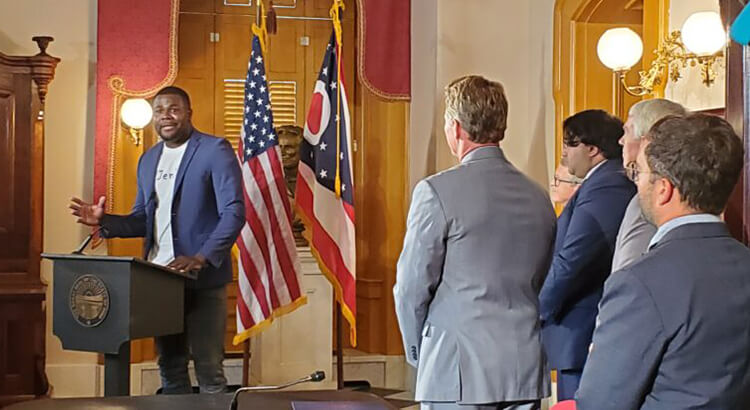 When a legislative effort was fumbled, it was said that Gov. Mike DeWine picked up the ball and ran with it.

As it turned out, the Ohio General Assembly did get the job done before the final bell sounded.

Sports metaphors abounded inside the Statehouse on Monday as two branches of government worked to enact a plan to allow college athletes to earn compensation off their own names, images and likenesses (NIL).

With some of the other states about to see their NIL laws go into effect on July 1, Ohio officials felt pressure to act by then — lest athletics programs here would be at a competitive disadvantage.

“This is a recruiting issue,” state Sen. Niraj Antani said plainly. “We want our teams to win.”

Antani’s Senate Bill 187 was on its way toward meeting that deadline after receiving a unanimous vote in the Ohio Senate.

Things went sideways in the Ohio House of Representatives last Thursday when a conservative member added a surprise amendment to institute a transgender sports ban. The Republican-led House passed the new bill, but the changes weren’t well received by state senators.

DeWine, who has line-item veto power when it comes to the budget, is expected to leave the NIL provision in place. The governor told reporters he supports the merits of NIL legislation even without the immediate need involving competition and recruitment.

“I think the time has come,” DeWine, a noted sports fan, said of letting college athletes profit off their likenesses.

Lt. Gov. Jon Husted said he views the subject as he does the broader economic development focus in Ohio.

“If you want to compete at the highest levels you need the best talent,” Husted said, “and we want the best talent to know that they can succeed and prosper in Ohio.”

The DeWine administration is more skeptical of the proposal to prohibit transgender girls from playing high school and college women’s sports. DeWine declined to say whether or not he would veto such a bill if it reached his desk, but did suggest again the issue is best left up to organizations like the Ohio High School Athletic Association to decide.

Smith, the OSU athletic director, described being “slightly confused” upon learning the transgender ban was added to the legislation.

That’s politics, was the consensus of those present at DeWine’s executive order signing.

One way or another, current and future athletes in the Buckeye State are positioned to benefit from the new NIL rules. Working in a Statehouse that sees its share of political infighting, Antani offered a statement that likely has its share of bipartisan support: “I’m for Ohio State football. I’m not for Alabama football.”