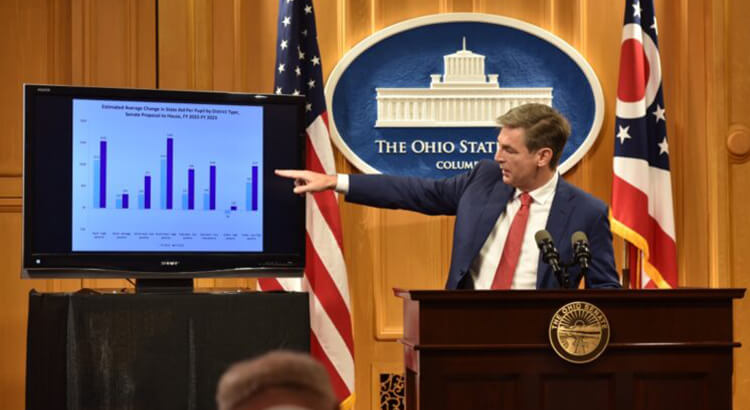 Officials representing Ohio’s teachers say the Senate’s new version of the public school funding overhaul leaves much to be desired, unlike the House version it would replace.

“It is a matter of political will and it’s a matter of priorities, and prioritizing public education just doesn’t seem to be where the Senate is when you look at the broad picture,” said Scott DiMauro, president of the Ohio Education Association, in a press call hosted by the Children’s Budget Coalition.

In a presentation of the Senate budget proposal earlier this week, Senate President Matt Huffman and state Sen. Matt Dolan, R-Chagrin Falls, questioned the sustainability of the House plan in terms of cost and said the Senate’s plan would would last through the six-year phase-in of the overhaul.

“The different is our plan is sustainable and can be paid for, not only in these two years, but in the out years,” Dolan said.

The Senate’s plan would set a base cost — the cost to educate one child in the state — at $6,110 per pupil. That number represents a 1.5% increase from the last biennial budget, but is less than the $7,200 per pupil base cost in the House plan.

One part of the House’s plan that remains in the Senate plan is the direct funding of private school voucher scholarships, often called EdChoice vouchers. With direct payments from the state, public school districts will no longer have a certain funding amount deducted from their funding, to represent a student who has moved (or has always been) in a private school.

While education officials say they are relieved that the direct payment piece survived the move from the House to the Senate, they are disappointed to see a 25% increase to private school voucher funds, well above the 1.5% increase public school students are getting.

Advocates for the House version of the school funding plan also criticized the 5% income tax cut included in the new budget proposal, saying it’s yet another cut to school support. Under the plan, which Huffman said is meant to reward workers more than the House plan’s 2% tax cut, tax revenues will be chopped a total of $874 million over the biennium.

This loss will only hinder schools who are asking for more funding and a better state-local balance.

“Losing this revenue will hamstring Ohio’s ability to adequately fund our schools and other important programs,” DiMauro said.

Tracy Najera, executive director of the Children’s Defense Fund and member of the Children’s Budget Coalition, said the tax dollars would be better spent as investments in the child care and public school education sectors so that working parents have less worries.

“We keep hearing from employers that they need folks in the workforce ready to hit the ground running,” Najera said. “That doesn’t happen by accident, it happens because you have a quality K-12 infrastructure.”

Public hearings on the budget began on June 2, with the legislature set to approve the budget by July.